Recently our Abbot General, Dom Bernardo Olivera, wrote a lengthy reflection entitled: Reflections On The Challenge of Charismatic Associations in which he states, “In various places where our Order exists today, we see persons or groups who want to share our charism in one way or another.” Along with other communities throughout the Order, this desire has surfaced among our friends and benefactors here at Genesee. See how to join below.

In an effort to respond to this desire we have formed a group known as The Genesee Lay Contemplatives. The following paragraphs define the group and outlines its formation program.

The Genesee Lay Contemplatives (GLC) is a group of men and women committed to following a life-long search for God within the Benedictine/Cistercian Tradition. Sponsored by the Cistercian Abbey of the Genesee, they are under the supervision of the Abbot. A monk, appointed by the Abbot, serves as the Spiritual Director for the lay community and directs and aids them in deepening their spiritual life. 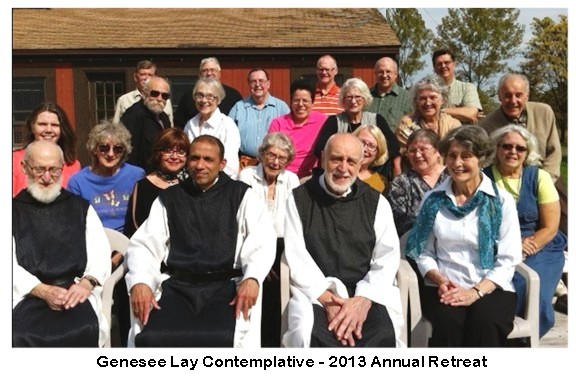 This is not an oblate program in the canonical sense, rather a relationship with the Abbey of the Genesee. Since their beginning in 1993, the GLCs have adopted a Way of Life so as to closely follow the Cistercian way of prayer, silence, solitude, and simplicity of life; and practiced as follows:

Application
Those seeking to become a Genesee Lay Contemplative (GLC) must:

The period of Candidacy lasts for 28 calendar months (January of Year I through April of Year III) The first 20 calendar months (January of Year I through August of Year II) are spent in separate formation. The last 8 calendar months (September of Year II through April of Year III) are spent in common formation with all Committed Members. The first five months of Year I are considered to be a special period of discernment during which Candidates begin to discover if they are experiencing a call to this way of life. These five months culminate in the making of a simple First Promise of fidelity. During the entire formation period, candidates progress through a program of classes concentrating on the Rule of St. Benedict, the History of the Cistercian Order and of the GLC community, Prayer, and Cistercian Spirituality. Each month Candidates write and submit a Reflection Paper based on their formation readings. At three separate points during this formation period Candidates will

At the end of the 28 month Period of Candidacy, the Candidate, if approved by Council, will make their formal Act of Commitment in May of Year III.

Joining the GLC
If, after prayerful consideration, and you are Roman Catholic you would like to apply to join the GLC, please contact:

All content copyright © The Abbey of the Genesee. Webmaster, Sojourner Web Design Studio