A monastic foundation is the establishment of a new monastic community by monks or nuns of one or more firmly established communities. In keeping with ancient tradition the new community is known as a Daughter House and the founding community is referred to as the Mother House. Here at Genesee we are blessed with three Daughter Houses: Our Lady of Mt. Calvary, Awhum, Nigeria, Nossa Senhora do Novo Mundo in Brazil and Holy Cross Monastery, Illah, Nigeria.

Our Lady of Mt. Calvary 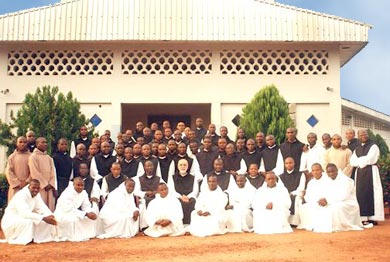 We are continually enriched with the presence of brothers from Awhum coming to us for further formation, study and preparation for the priesthood. Over the years, ten of the Awhum brothers have spent time here.

Our Lady of Mt. Calvary can be considered an adopted Daughter House as it was an already established and flourishing Nigerian community when Genesee became its Mother House. The community’s founder, Fr. Abraham Ojeufa, a well-known Nigerian diocesan priest, after joining the Benedictines in Nigeria and living with the Gethsemani community in the US undertook the hermit life in Nigeria during the Biafran War.

Before long, young men joined him placing themselves under his direction. In May of 1970 Bishop Godfrey Okoye established the growing community at Awhum as a diocesan institute. Fr. Abraham had, from the beginning, introduced the Cistercian usages he learned while at Gethsemani and the community experienced steady growth.

In 1974, with 24 brothers in the community, Fr. Abraham petitioned the Abbot General of our Order, Dom Ambrose Southy, to admit Awhum into the Cistercian Order of the Strict Observance with Genesee for Mother House. Dom Ambrose asked Abbot John Eudes of Genesee to make a private, unofficial visit. When the results were favorable their request was taken up by the General Chapter. The General Chapter of the Order reviewed the petition in 1974 with favorable results and commissioned Abbot John Eudes to make an official visitation of Awhum.

In 1975 Abbot John Eudes, after his third visit to Awhum, reported favorably regarding Awhum’s readiness to enter the Order. Subsequently our community here at Genesee voted to accept the community as our Daughter House. The General Chapter of 1977 voted to admit Awhum into the Order with Genesee as Mother House.

The actual entry took place during a special ceremony on July 2, 1978 when twelve Nigerian monks made simple profession as Cistercian monks. As the community continued to grow and develop monks from Genesee, Gethsemani and Holy Spirit were sent to help with formation and instruction. On November 21, 1981 Awhum became a semi- autonomous priory. Twelve monks made their solemn profession of vows on that day and on November 23rd Fr. Paul Usulor was elected first prior of the community.

Despite the many struggles and difficulties of a fledgling community in a politically and economically unstable country the brothers continued to grow in maturity and numbers. With considerable help from their Mother House new buildings were erected and a monastic church dedicated in 1994. Fr. Anthony Onucha was elected prior in February, 1994. At the present time there are about 70 monks in the community.

At the expiration of Fr. Anthony’s term of office the election for a prior took place on February 15, 2000 during which Fr. Bertrand was elected for a six year term. The election was presided over by Abbot Augustine Roberts, Procurator General of the Order. 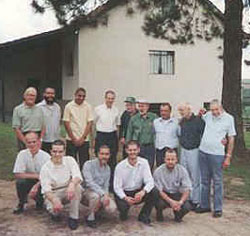 Nossa Senhora do Novo Mundo, Our Lady of the New World, in Brazil can be considered a daughter house by birth since the original founders were brethren of Genesee along with Fr. Francisco of Azul in Argentina.

On April 30, 1976 Dom Augustine Roberts, prior of Azul in Argentina, visited Genesee. He and Dom John Eudes, Abbot of Genesee, discussed the latter’s idea of a new foundation in Brazil. On May 1st they presented the idea to the Genesee community which was favorably received for the most part. Dom John Eudes then began exploring possibilities by contacting a Bishop of Brazil, Bishop Matthias Schmidt, OSB, and visiting sites in Curitiba and Novo Friburgo.

After discussing the matter the conventual chapter at Genesee, on April 1, 1977, voted 24 to 2 in favor of establishing an annex house in Brazil. The foundation was officially begun on October 24, 1977 with Fr. Francisco of Azul as superior and Fr. Jerome, Bros. Barnabas and Cyprian of Genesee as the first contingent from Genesee. Over the next several years several others from Genesee joined the founders. Some remain, most eventually returned to Genesee.

On February 25, 1980 the community was declared a foundation with the right to receive novices. March 4, 1982 the community moved from its original site in Lapa to its present location in the diocese of Curitiba, Parana, Brazil.

On August 23, 1988 Novo Mundo was declared a simple priory. During the celebration of the Eucharist that same day eight monks of the community made their stability. Later in the day the former Novice Master of Azul, Dom Eduardo Gowland, was elected Prior for a period of six years.

The community was saddened when, on Easter Saturday, March 1989, Br. Cyprian died of lung cancer. Br. Cyprian, a founder both of Genesee and Novo Mundo, was an able electrician and a fervent monk. His passing on to better things was a loss to the struggling community.

About two years later, Novo Mundo lost Dom Eduardo as its Prior when he was elected Abbot of Azul. On Nov 2, 1990 an election for another Prior was held during which Dom Felix Donahue, Prior of Gethsemani, was elected for a six year term, and confirmed by the Abbot General, Dom Bernardo Oliveria. Near the end of his term to allow for an election some months before the 1996 General Chapter to be held in October, Dom Felix resigned on June 27, 1996. Dom John Eudes appointed him superior ad nutum until the election could be held.

During the visitation by Dom John Eudes Fr. Bernard Bonowitz, Novice Master at Spencer, was elected Prior for a six year term on July 13, 1996. Having been confirmed by the Abbot General the same day he was installed as Prior by Dom John Eudes on July 15th.

During the visitation of February, 2000 Novo Mundo was raised to the status of a major priory on February 1st some twenty-three years after its foundation. At that time the community voted in favor of electing a prior for an indefinite term. The next day, February 2nd, Feast of the Presentation of Our Lord in the Temple, Fr. Bernard Bonowitz was elected as prior and on the evening of that same day he was confirmed and installed in office thus beginning a new phase in the community’s growth and development.

Abbot John Denburger, Abbot of Genesee, made his first visitation of the community during February 2002. At that time the community numbered 14 brothers including two from Genesee, (Frs. Jerome & Stephen) one  from Spencer (Dom Bernardo, Prior)and one from Gethsemani (Fr. Felix). There are eight solemnly professed, two juniors, three novices and one postulant with several observers due shortly. With the completion of their building expansion program the community now has ample room to receive new members.

The brothers are able to support themselves by their farming, baking, honey and chicken industries. The community’s liturgy is entirely in Portuguese due to the able composition and translation work of Frs. Justin & Marcellus of Genesee.

Fr. Abraham Ojefua, the founder of our community in Awhum, also began another community, Holy Cross Monastery on August 15, 1982. The monastery is located on 122 acres of fertile land that was donated by the people of Umutei village of Illah for the purpose of establishing a monastery.

The community consists of eighteen members ranging in age from twenty-seven to sixty-nine. There are eleven solemnly professed, five temporary professed and two novices. Fr. Innocent Ugyeh is the superior.

From the earliest days the community has been engaged in crop farming for their support, chiefly yams and cassava. In addition they have breed chickens for egg production and operate a piggery. At the moment they are looking into the possibility of a fishery.

The monastery was founded as a diocesan institute under the jurisdiction of the local bishop and continued that way until our General Chapter of 2005 when they were received into the Order with Genesee as their father immediate. This arrangement is for a six year period after which time it will be reviewed by the General Chapter. Abbot John Denburger will visit them when he makes the visitation at Awhum in February, 2006 and officially receive them into the Order.