What, dear brothers, is more delightful than this voice of the Lord calling to us? See how the Lord in his love shows us the way of life. (Prologue – Rule of St. Benedict)

Applicants to our community should be between 25 and 50 years of age, Roman Catholics in good standing, regularly practicing their faith and free from all moral and financial obligations. Converts to the Church should wait at least five years before entering monastic life.

They need to be in good physical and mental health and possess above average spiritual and emotional maturity required for community life.

The discernment process begins with the initial contact between the applicant and the Vocation Director. This is normally done by correspondence and/or phone conversations.

If these develop positively they will be followed by a personal visit of the applicant to the monastery for a few days retreat at our guest house. Before coming for a visit the candidate will fill out and send to the Vocation Director a preliminary questionnaire and write a brief autobiography. During his visit he will meet with the Vocation Director. Together they will try to discern whether or not God seems to be calling the candidate to monastic life at Genesee.

If the discernment is positive the candidate will also meet with the Abbot and Novice Director for verification and approval. The Abbot, Vocation Director and Junior Director comprise the Admissions Board. When everyone concerned is in agreement the candidate will be considered for a 30 day observership in the community. Or, if the candidate is not quite ready for the observership, a stay as a monastic guest may be a consideration. 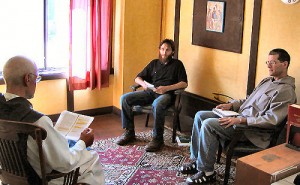 A candidate whose application has been approved by the Admissions Board but who feels not quite ready for the observership may make a vocational discernment retreat in the community. The length may vary from a week to a few months. During this time he will live the full monastic life of the community on the professed side of the house with the Abbot and Vocation Director as mentors.

Before entering the observership the candidate will fill out and send a detailed questionnaire and write a detailed autobiography, sign a statement of truth and freedom and provide testimonial letters. When these are all in order he will be invited to live in the novitiate as an observer, following the novitiate daily schedule. The observership is the candidate’s introduction to monastic living and his first stage of formation. It is also a time for further discerning and testing whether or not God is calling him to monastic life at Genesee. If all parties concerned are positive the required psychological assessment could be done at this time.

Before final approval for postulancy the candidate will assemble the documents required by the Church and Community. He will also take psychological, medical and dental exams. After all the results are in he will be informed whether or not his application is approved. If it is approved he will settle all his affairs before entering the community as a postulant.

Normally the postulancy lasts for one year. It is a time for adjustment to monastic life, continuing formation and further discernment and testing one’s call with emphasis on preparing oneself for entering the novitiate. At the end of the postulancy, if everything is in order, the candidate will present a petition to the Abbot for admission into the novitiate. The abbot will then discuss his application with the Abbot’s Council. If everything is in order the candidate will receive the monastic habit of a Cistercian novice and become a member of the Community.

Though discernment continues during the novitiate the emphasis is more focused on preparation and training for taking monastic vows. It lasts for a period of two years but, for good reason, can be extended up to six months.

Monks transferring from another house of the Order who are not in solemn vows will spend a year of probation in the novitiate and three years in the juniorate. A religious transferring from another Order will spend two years probation in the novitiate beginning with the arrival of his transitus and three years in the juniorate.

During this time the candidate is under the direction of the Abbot and the Novice Master and is free to leave of his own accord or he can be dismissed if that is indicated.

When his novitiate is complete, and the Abbot with his Council and the vote of the Conventual Chapter approves, the candidate may take first vows and enter upon the juniorate program of monastic formation.

Upon making his first vows the candidate will leave the novitiate and take up the life of the junior professed. The juniorate is three years with annual renewal of vows. When there are adequate reasons it can be extended up to six years more.

During this time the candidate lives the monastic life of a professed member of the community steeping himself further in monastic tradition and spirituality and preparing for final profession. He will be under the direction of the Abbot and Junior Director. 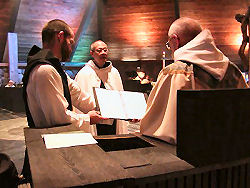 The genuine call to take up one’s cross each day according to the evangelical councils and in monastic stability and conversion of life comes only from God. It may surprise some to learn that although the practice of poverty and chastity are essential to monastic life they are not explicitly mentioned in the monastic formula for profession of vows. Since the time of St. Benedict the words stability, conversion of life, and obedience have been adopted as very apt terms to designate the responsibilities assumed by the monk on the day of his profession. In monastic circles the vows of poverty and chastity are contained within that of conversion of life. The traditional formula of monastic profession, used during the last eight centuries is as follows:

I, Brother (N), promise my stability, my conversion of life and my obedience until death in accordance with the Rule of St. Benedict, Abbot. I do this before God and all his saints, in this monastery of (N), of the Cistercian Order of the Strict Observance, constructed in honor of the Blessed and ever Virgin Mary, Mother of God, and in the presence of Dom (N), abbot of this monastery.

(The question is often asked: Is there a difference between chastity and celibacy? The answer is: Yes! Celibacy is the state of not being married. Chastity is a virtue expected of all Christians according to their state of life. For a vowed celibate or a single person chastity means the avoidance of all sexual activity. For a married person chastity means the practice of sex only within marriage between man and woman. For consecrated religious the ‘vow of chastity’ is, strictly speaking, a vow to remain celibate.

From the Catechism of the Catholic Church: #2349 People should cultivate [chastity] in the way that is suited to their state of life. Some profess virginity or consecrated celibacy which enables them to give themselves to God alone with an undivided heart in a remarkable manner. Others live in the way prescribed for all by the moral law, whether they are married or single. Married people are called to live conjugal chastity; others practice chastity in continence.) 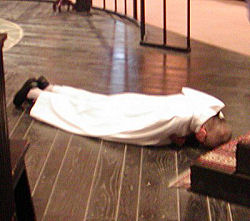 The primary responsibility of the newly professed monk is to love with all his heart. The vows presuppose this love and express it exteriorly by incorporating him into a state of life which has no other reason for existence than the love of Christ and all that implies. The monk is a lover, not only interiorly and spiritually, but also exteriorly and juridically. The newly professed brother will choose a mentor from among the seniors of the community for a two year period. His mentor will accompany and guide him as he adjusts to his new status.

You will find a list of books about monastic life that can be purchased may be purchased through Amazon.com on our Monastic Life Books page.

You may contact the vocation director with any questions you may have or to tell him of your interest by E-Mail at Vocation Director or at:

To their fellow monks they show the pure love of brothers; to God, loving fear; to their abbot unfeigned and humble love. Let them prefer nothing whatever to Christ, and may he bring us all together to everlasting life.(Chapter 72 – Rule of St. Benedict)