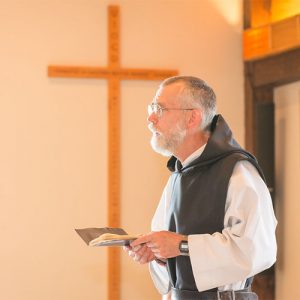 I was raised Catholic in a small rural parish. Sunday mass, the Stations of the Cross during Lent, along with the faithful witness of my grandmother and a grandmotherly neighbor, were a strong influence in my life growing up. At 14, first thoughts of a life given to God in prayer came to me, but during my teen years and early 20’s struggles with worldly desires and unfaithfulness to certain Church teachings marked my life. Gradually, the struggle was resolved when I encountered the love of our Blessed Virgin Mother as revealed in some of her apparitions, calling the faithful to a life of prayer, fasting, daily reading of scriptures and daily Mass. A whole-hearted desire to discover the best way to respond to Mary’s call led me to seek the counsel of my parish priest. He invited me to participate in a discernment retreat at a nearby Trappist monastery… It was there I found what I had been searching for: a life lived totally for God; a simple, peaceful life, filled with quiet joy. A life that prepares us for our eternal vocation: to sing the praises of God forever. 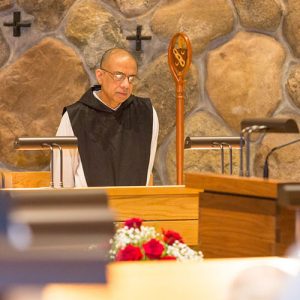 I was born in the Middle East in 1958. My father worked for the British Petroleum Company and for the first five years of my life I lived in Bahrain. My family then moved to Mumbai, India where I did my schooling and college. I was a seminarian for the Archdiocese of Mumbai and it was in the seminary that I chanced upon a book by Thomas Merton called The Silent Life. This was the very first time I had heard of the Trappists and the seed was sown in my heart and imagination. There was nothing else I wanted after that. I had to leave the seminary to help my Dad out in the family business but the desire to be a monk never left me. In 1988, my family immigrated to North America. I lived, studied and worked in New York City. I was able to look at the Trappists and the Carthusians and finally joined Genesee Abbey in 1992. It was close to 14 years between my reading The Silent Life and being able to finally enter the monastery. I believe those 14 years were years of preparation for the monastic life in God’s plan. I made solemn vows in 1999 and was the novice master from 2004 until 2012 when I was elected abbot. I have heard it said that the reasons that bring a man to monastic life are not the reasons that keep a man in monastic life. This is certainly true in my case. The mystery of Christ’s presence mediated through the Liturgy, in community, in sacred reading, in study, in service to the brothers, in silence and solitude – this is what keeps me in the monastery. 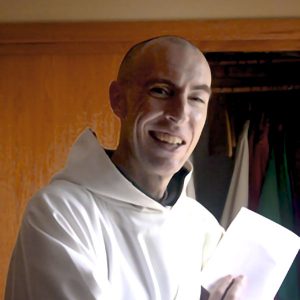 My first image of a Christian monk was in Dostoevski’s novel The Brothers Karamazov, which I read for the first time, at least in part, when I was about 16. One of the book’s heroes, the elder Zosima, is an aging monk whose spirit of universal mercy is set in counterpoint to the pervasive nihilism of late 19th century Russia. As a young man, Zosima had gotten into trouble then had a dramatic experience of conversion in which he experienced the meaning of forgiveness in a powerful way that changed his life and set him on course to the monastery. At the heart of Zosima’s spirituality is a deep sense that in a mysterious way each one of us is guilty to all for everything. I would later learn that some of his discourses were borrowed from homilies by the 7th century monk St Isaac of Syria. In one of these, he speaks of the man of mercy as one consumed with love for humanity, who prays from the heart for everyone, even the demons, even the lizards! On my first retreat at a Trappist monastery, I read André Louf’s Tuning into Grace and a passage he cites from St Isaac deeply confirmed my sense that I was on the right track in looking to become a monk. It said basically that the solitary and repentant follower of Christ does something for the world even more powerful than someone who works miracles or preaches to the multitudes…I was living in Toronto at the time and looked for writings by St Isaac everywhere but couldn’t find anything. At this point, I was looking at entering the Abbey of the Genesee and hoped they might have a book by him there. Sure enough, the very first night I came to Genesee as a postulant, not only did they read from St. Isaac at vigils—they had one of only 500 copies of his homilies published in English—but they were reading the very passage Dostoevski had placed on the lips of Zosima, about the monk as a person of mercy who prays from the heart for everyone. I knew then I was in the right place — and had a strong hint as to what name I might take as a monk. 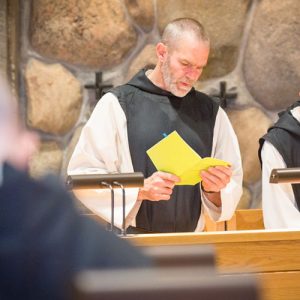 Born in Porterville, Ca. Youngest of ten children. Father very devout. He led us in the rosary every night. Grew up on a farm. Attended public schools. Enjoyed sports, animals, fixing things, working outdoors. By sophomore year of high school I was set on being a priest. Entered diocesan seminary after graduation at 18. Four years of college seminary, one year of theology. Felt a call to monastic life. Entered the Trappists in Utah in 1985. Enjoyed the work, the beautiful scenery, the prayerful atmosphere, and the other monks. Five years later, in 1990, I felt God was calling me to the Carthusians. Switched to the Charterhouse in Vermont. Was a choir religious, on track to be ordained a priest, rounding out my seminary studies. After eight years I didn’t make the vote for solemn profession. Returned to the Trappists in Utah. The doors were closed to me there too. Went home, sad. The love of my family perked me up. Still felt drawn to the monastic life, so pursued that path while remaining open to other paths if God were to make it obvious. Visited several monasteries. It all felt right when I got to Genesee. I entered in June of ’99, made solemn profession in Dec. of ’02, and was ordained in May of ’06. I have found an outlet for my love of outdoor work by managing our woods, thinning, and cutting down mature trees for logs for sawmills and furniture. We have a great shop/garage where I spend time tinkering with things that break down. People come to the Abbey for confession and spiritual counseling. Many graces have occurred in the exercise of my priestly ministry. I’m not strong on self-discipline, so the schedule of prayer and spiritual reading is good for me. It keeps my life in balance. The community life has also been very fulfilling, although sometimes a trial. From the outside, it may look like this life has many deprivations. Every state in life has its pluses and minuses. The older I get the more thankful I am for being in a place like this. 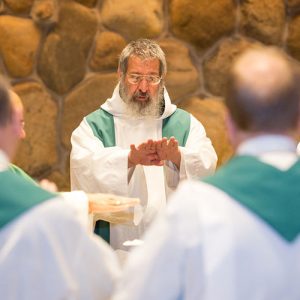