THE ABBEY CHURCH AND BREAD STORE
ARE NOW OPEN 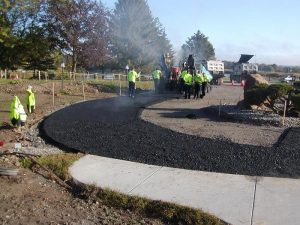 been delayed. Hopefully early this week, depending on weather, the contractors will be able to finish the job.

Meanwhile the front entrances are open to foot traffic but not for cars. The cars can be parked in the usual parking space, not newly paved, and one can take the short walk over the new pavement to the store and church.

Final Conference
Friday evening before Vespers Bishop elect Erik Varden gave the community his final conference, informative and lively as usual. Early yesterday morning he and Abbot Mark Scott of New Melleray Abbey left for the long drive to Iowa. From there Fr. Erik will travel to Santa Rita Abbey in Soniota, Arizona to give the community their annual retreat. His term of Abbot of Mount St. Bernard in England will come to an end on November 1st and sometime in January he will be consecrated Bishop-prelate of Trondheim, Norway.

dialogs. Especially the question as to how Cistercian Monks of the Strict Observance should respond to the challenges of the 21sth century. The week concluded with a feast day dinner and a gaudeamus supper, that is, a let us rejoice supper otherwise known as a talking supper, one of the three or four occasions during the year when we speak during a meal. A special feature of the supper was the home made pizza by Br. Paul.

And so the world is renewed in every moment of time. Every moment has only one existence. It has not existed before, and it will not come again. It springs from the eternity of God’s love and takes all being and all that is and all that happens into itself for the sake of God’s children.