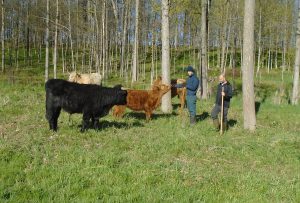 including  one bull and one newborn calf.

The Highland is an ancient breed of cattle that originated in the Scottish Highlands and Western Isles of Scotland. First mentioned in the 6th century A.D., the breed is known for 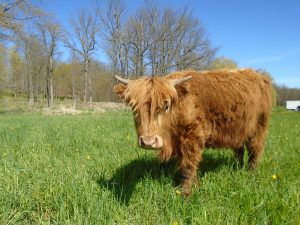 its long, thick hair and its hardiness in harsh conditions. In Scottish Gaelic they are known as Bò Ghàidhealach and in Scots they are called Heilan coo. In the first herd book that the Highlander is mentioned in there are two distinct breeds, but over time and crossbreeding there is now only one official cow in the registry. While originating in Scotland, the breed has since made its way to Australia and New Zealand, all across Europe, Canada, and the United States. 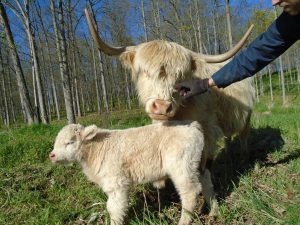 a variety of colors. At shows, they are often groomed with oils and conditioners that make their coats look fluffy, and are sometimes called “fluffy cows.” The thick coats of this Scottish breed make them well-suited to colder temperatures, but less tolerant to excessive heat. The advantage is that they require no barn or shelter even during our Western New York winters as their woolly downy undercoat keeps them warm, while the longer guard hairs shed snow and rain. Their coat also protects them from strong winds while their long horns help them dig through snow to get to grass underneath. 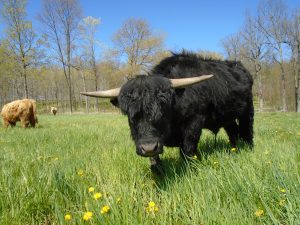 Though not often used as dairy animals, since they are primarily a beef breed, their milk tends to have a very high butterfat content. Another advantage of this breed is while cows can weigh in at 1,100 ponds and bulls up to 1,800 pounds  they are a friendly breed although bulls can become aggressive at times. One does well to carry a stick to give them a gentle tap on the nose if they become ‘too friendly’.

For information about the availability of the products of our farm contact the farm manager, Porter Hunt at: porter@geneseeabbey.org.

Coming and Going
This past week our Fr. Isaac was away participating in the  54th International Congress on Medieval Studies which took place on the campus of Western Michigan University on May 9 to 12, 2019 as a member of the Advisory Board representing the Cistercians. He is due back later today.

For a few days this past week Abbot Gerard was away for a meeting of the Board of Administrators for the publication, Cistercian Studies Quarterly. He returned on Thursday.

Finally, Tomorrow Fr. John Denburger will leave for a meeting of the U. S. Region Junior directors  being held at St. Joseph’s Abbey, Spencer, MA. He’s due to return Monday, May 20th.

We must aim at heaven with all our strength. Man will have to re-learn, much more positively and intensively than before, that life leads from the personal dialogue with God to the actual personal encounter and the experience of unity with God.

He will have to learn that this is his heaven and his real, his only, home. Then he will learn to pray, not merely as a duty and in obedience, but with intense vitality and with all the driving force of his own free will.