Br. Cyril Anderson, OCSO February 22, 1926 – February 2, 2018
It was on the Feast of the Presentation, February 2nd, when a few of the brethren were gathered in his infirmary room saying the prayers for the dying that our Br. Cyril passed away as the Salve Regina (Hail Holy Queen) was being said. A fitting send off for our kind and gentle Brother Cyril.

Br. Cyril (Charles, Philip Anderson, Jr.) was born and raised in Omaha, Nebraska. During his senior year in high school he was drafted into the Marines and served in the Western Pacific. He is one of the few survivors of the Battle of Iwo Jima. At age 28 he joined the Trappist community of Holy Trinity in Huntsville, Utah and made solemn profession on August 15, 1957.

During his monastic life he worked at many chores of his abbey. In 1972 he helped in the foundation of the Trappistine Sisters in Santa Rita Abbey, Arizona. Then in the 1980’s he responded to a call for volunteers to help with the foundation of Butende Monastery in Uganda during the civil war. He was an invaluable help to the Sisters during the five years he was there after which he returned to his monastery of Holy Trinity.

In the year 2011 it was decided to close Holy Trinity due to lack of vocations. Whenever a community has to close the members of the community are able to transfer to another community of their choice. 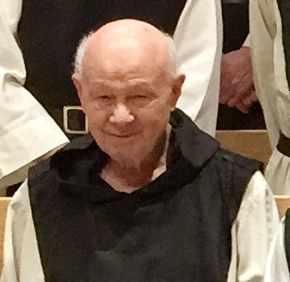 Br. Cyril choose Genesee and arrived in the community on November 3rd at age 88. He made his stability to Genesee on September 8th 2016.

Shortly after his arrival his health took a sudden turn for the worse and he took up residence in the Abbey infirmary. In keeping with his good humor he joked that he went from 39 to 89 all at once. During his prolonged illness Br. Cyril, with his cherubic smile, maintained his usual gentle and cheerful self . He will be missed by the community.

Br. Cyril’s body will arrive at 5 PM Monday and the funeral Mass will be in the Abbey Church at 10:00 Tuesday, February 6th followed by burial in the Abbey Cemetery. May he experience the fullness of eternal life!

Blessed are the poor in spirit, those who have allowed themselves to be stripped of the old spirit, the spirit of acquisitiveness and security, for theirs is the kingdom of heaven, because they no longer seek to possess, but to be possessed, to lose themselves and all that is theirs in the ecstasy of simple receiving and simple giving again, or more accurately, without even any giving or receiving, in the simple being which is the authentic image in us that divine ecstasy of being which is the living God.