Fr. Gerard Away
This morning our Abbot Gerard is traveling to our Brothers at Holy Cross Abbey, Berryville, Virgina, to give them their annual retreat. Before returning home he will travel to Mount St. Mary’s Abbey, Wrentham, Massachusetts where he will join the community and others for the blessing of their newly elected Abbess, Mother Sophia.

On February 11th, the feast of Our Lady of Lourdes, both Mary and the Holy Spirit were palpably present 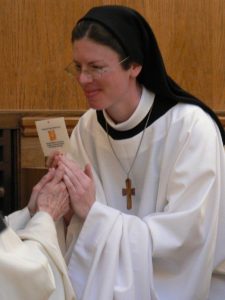 as we elected our new abbess, Mother Sofia Millican, a citizen of the United Kingdom who spent most of her childhood in Wales.  When she was an undergraduate at Harvard University she attended a Monastic Weekend at our monastery, an experience which led her comparatively quickly and directly to entrance as a postulant, October 15, 2007.  She made her Solemn Vows the Sunday after Easter, 2014, and at the time of her election was sub-prioress, web master and production manager of Trappistine Quality Candy.  Her joyful yes to God and to the community over the years and particularly on the day of her election is a source of great joy and hope for us as well.
Abbot Gerard is due back on Monday the 16th.

Departure
This past Friday our observer, Kameron Traxler, left to return home after being with us for nearly three weeks. By the grace of God he was able to come to the discernment that at 19 years of age he was not yet quite ready to consider final commitment in a cloistered monastic community. Although we were sorry to see him depart we thank God he had a good experience and was able to come to a definite decision. We will be continue supporting him with our prayers as he continues his discernment.

The Resurrection of Jesus
Kenan B. Osborne, O.