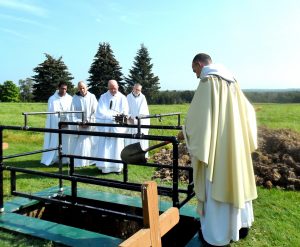 May He Rest In Peace
It was a beautiful summer day this past Tuesday as we laid Fr. Marcellus to rest in the Abbey cemetery. Joining the community for the funeral Mass and burial were family members and friends of the community. If you haven’t seen it already you may want to read the homily given during Mass by Fr. Isaac, the principle celebrant. You’ll find it at funeral homily.

The community expresses its sincere gratitude for each of the several messages of condolence we have received. We now have thirty-three brethren in our cemetery overlooking the Genesee Valley. There’s a brief bio of each of our deceased on our web site at Our Deceased.

General Chapter
Later this week the Order’s General Chapter being held in Assisi, Italy will come to a close and Frs. Gerard and Stephen will return home late Thursday. It will be good having them back with us once again. 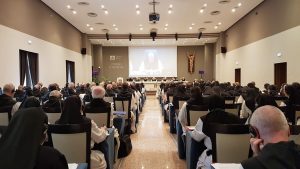 Fr. Stephen has been sending us regular reports of the goings on at the Chapter. The main theme of the Chapter is the timely topic: Vision of the Order; how we can preserve our inherited charism and pass it on to the next generation. Apparently the ensuing discussions were quite lively and thought provoking. We eagerly await the  final reports and decisions of the meetings. Today the entire Chapter will travel to Rome for a private meeting with Pope Francis.

Once again, Jesus’ action (raising Lazarus from the tomb) causes a division. Many of those who “saw what he did, believed in him.” Yet there were others who also “saw what he did” and, far from believing in him, went and denounced him.

No amount of good works, even spectacular works, is sufficient; no show of power, even the power to bring the dead to life from the tomb, is persuasive; no; quantity of reasons and reasoning can compel any one of us to believe.

What faith in the Revealer requires is nothing short of letting go of all that I cherish and hold most dear: my view of myself, my; understanding of who I am, my system of values, and all the manufactured props and supports of my restless self.