Tour and Picnic
This past Tuesday we held sort of a ‘get acquainted’ day for the  36 managers of the national bread distributor, Bimbo Bakeries  the distributors of Monks’ Bread. Many of the managers had never been to the Abbey before and were unaware of the roll our bakery plays in supporting the 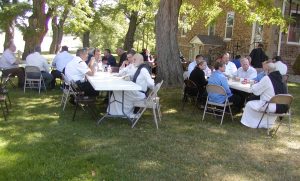 monastery. It gave us the opportunity to explain to them that in promoting Monks’ Bread they are contributing to the mission of the Church as well as of the Abbey.

The day consisted of a tour of the monastery itself and of the bakery in operation. They joined us for mid-day prayer which was followed by a picnic lunch at Bethany House with perfect weather that helped make the day the success it was. Besides getting acquainted the get together was to show our appreciation to them for all they do to make the distribution of our bread the success it is.

September 14th
Then on Wednesday we celebrated the Feast of the Holy Cross, the day we resume wearing the monastic cowl for the major hours of the Divine Office in choir. Normally we discontinue wearing them in May due to the summer’s heat. More often than not the weather remains warm after we don the cowls but this year it turned mercifully cool and has remained so.

The day marks the beginning of the monastic winter season and on the day following we resume the monastic fast which is sort of a mini-monastic pre-Lenten fast. Meals, especially breakfast, will be a bit more Spartan than they have been since Easter but still adequate enough for the ascetical life.

September 19th
Tomorrow we will celebrate the annual commemoration of the deceased of Genesee, the 61st anniversary of our founding Abbot, Dom Gerard McGinley. You will find the list of our deceased, both those of Genesee community and those of our foundation in Brazil on our Deceased Page  along with a brief biographical sketch of each.

Awhile ago Abbot Gerard was designated to make the visitation at our Abbey of New Melleray in Dubuque, Iowa. According to our Constitutions each monastery is to have an official visitation every two years to be made by the Father Immediate of the house or by an appointed delegate. Abbot Gerard will return on the 27th of the month.

Communion is what God wants and what we want. It is the deepest cry of God’s and our heart, because we are made with a heart that can be satisfied only by the One who made it.

God created in our heart a yearning for communion that no one but God can, and wants, to fulfill. God knows this. We seldom do. We keep looking somewhere else for that experience of belonging.