Father Marcellus Earl, OCSO
Our Father Marcellus died at Strong Memorial Hospital after a long and painful illness which he bore ever so patiently on Thursday, September 15th around 4:00 AM just as the monastic community was concluding the Divine Office of Our Lady of Sorrows 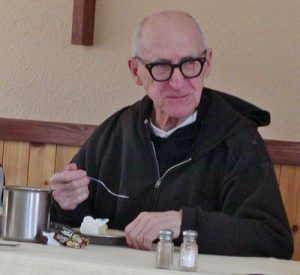 A native of Michigan he entered Genesee in 1954, made his solemn profession in 1959 and was ordained a priest in 1963. Fr. Marcellus was 86 years old, had been in monastic vows for 57 years and 54 years as a priest when the Lord called him.  He is survived by his sisters, Helen Ross of Largo, FL and Elaine Earl of Ludington, MI, many nieces and nephews and fellow Brothers at the Abbey of the Genesee.

His many contributions to the community include that of cantor, writer of liturgical music for the choir. For several years he eagerly managed the Abbey’s black Angus herd. He spent several years helping out at Novo Mundo, our daughter house in Brazil translating the liturgy into Portuguese and composing music for Divine Office and Mass. Several years ago he published three volumes of his homilies which are still available on Amazon at Walking With The Lord.

In our chapter meeting this morning the community had the opportunity of sharing their many memories of our departed Brother.

*September 19th is the anniversary of the death of our founding Abbot, Dom Gerard McGinley in 1955 and the day of our annual commemoration of all our deceased brethren.

Like any other genuinely free gift, the gift of eternal life has to be freely accepted. No one can compel you to receive it under threat or by force. Any compulsion to accept it as surely negates the essence of the gift on the part of the giver as it does its refusal on the part of the receiver.

Therefore, every one who sees the Son and believes in Him, every human being on the face of the earth who sees the Son, who acknowledges Jesus Christ as the Son of the Father, as the Revealer of the Father and the accomplisher of his will, has eternal life. The gift is unconditional on the part of the giver, but conditional solely on the part of the receiver, precisely because it is a gift.

This life, as we have seen, would not be eternal were it not for the resurrection at the last day. It is the resurrection that takes life out of the dominion of death (cf. 1 Cor. 15:26, 55). The resurrection is what makes the life of the believer, both before and after death, eternal life.

The Gospel Of John
Stanley B. Marrow, SJ