Schedule Change
Mass on Thursday of this week
Feast of All Saints will be at 10:00 am.

October 25, 2018: Dom Thomas Keating was born in 1923 in New York (USA). He entered Our Lady of the Valley in 1944, made his solemn profession in 1949 and was ordained a priest that same year. After the fire that destroyed that monastery in 1950 he transferred with the community to its new home at Spencer. He was appointed Superior of the new foundation at Snowmass in 1958. He served as Abbot of Spencer from 1961 to 1981. He transferred his stability to Snowmass in 1985. He returned to Spencer as an infirmary resident in April 2018 where he died in late October 2018. Dom Thomas was 95 years old, had been in monastic vows for 72 years and 69 years a priest when the Lord called him. May the Lord Grant him the fullness of eternal life! 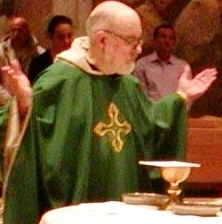 Also appearing on the Order’s web site, thanks to our Secretary of the Liturgy, Fr. Justin Sheehan, OCSO, is the news that the English Ordo for 2018-2019 has been completed and is now posted for all who might be interested in following the Order’s liturgical schedule for the coming year. It can be found at OCSO English Ordo and downloaded.

Not all at once, but little by little, the Lord calls us, even at times when we do not expect or maybe never even notice. He may begin by whispering little questions to our hearts. Or perhaps little annoyances of life will persist and pile up, until we begin to question who we are and who God is.

We begin to take on an eternal perspective, even without realizing that such thoughts are the result of God moving in us, calling us to himself. Little by little, we begin to respond in ways that we never would have done before.

Maybe we begin going to Mass during the week, we start reading scripture or pick up a book of spiritual reading that we saw in the back of church. Very, often this is how we begin a deeper walk with Jesus – not simply by our own design, but as a result of God’s love and mercy for us.