Visitors
For the past several days we were glad to have with us Br. Evaristus, monk of the monastery of Awhum our daughter house in Nigeria. Brother is currently staying at Gethsemani for added monastic formation and was given permission to visit Genesee, his mother house. Always good to meet one of our brothers from a daughter house.

Abbot General
Yesterday, Dom Eamon Fitzgerald and his secretary, Fr. Simeon Levia Merikakis, monk of Spencer, arrived for a few days visit. In keeping with his 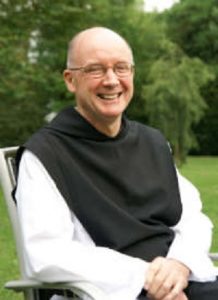 duties as Abbot General to visit each house of the Order every so many years he is currently visiting our houses along the East coast and on up to Canada. It was while he was Abbot of Mount Melleray in County Waterford, Ireland that he was elected as Abbot General at the General Chapter of the Order in 2008.

Dom Eamon, along with his secretary, spends over half of each year visiting various communities of the Order. That is no small chore considering there are 96 communities of monks and 73 of nuns throughout the world according to his report. It is no wonder that his last visit to Genesee was seven years ago. He spoke to us in chapter this morning giving us a lively report of the Order as he saw it complete with Irish brogue.

Note To Priests From Abbot Gerard: In keeping with the policies of the Diocese of Rochester and the instructions of Bishop Matano, the Abbey of the Genesee requires that all priests who plan on celebrating Mass at the chapel in Bethlehem Retreat House or concelebrating Mass at the Abbey must, upon their arrival, provide a Statement of Suitability for Ministry letter, (Celebret), from their Bishop or Superior verifying that that priest does not have any known misconduct allegations or other questionable behavior or personal issues. Copies of the said letter will be kept on file with the Abbot and at Bethlehem Retreat House.

We cannot do this, but we can follow him, cling to him, become his. If we belong to him as his limbs or members, then through our participation we become what he is: his goodness becomes ours. What the father says in the parable of the prodigal son is realized in us: All that is mine is yours (Luke 15:31).

The moralism of the sermon on the mount that is all too stiff for us is brought together and transformed into communion with Jesus, into being a disciple of Jesus; in clinging fast to our relationship to him, in friendship with him and in confidence in him.