Back Home
Late Thursday night after a long ‘red eye’ flight Abbot Gerard and Fr. Stephen, regional delegate for the United States Region, returned from the General Chapter that was held in Assisi, Italy for the past three weeks. Not only did they return with all the news of the Chapter but with the cold that swept through the capitulants toward the end of the meeting. In keeping with good monastic practice that monks are to hold all things in common nearly everyone had a share in it.

Our Fr. Stephen was one of those sending daily reports of the goings on at the Chapter here is a segment of his final bulletin:

Dom Eamon’s final address was the last item on the agenda. He is such a wonderful example of humility and simplicity and fatherly love. He commented that this Chapter was full of life, good energy, good humor, and a shared concern about our way of life. This Chapter sparkled with friendships, fraternity and dialogue. He told us that we need to not only go out to others but go deeper into ourselves; we need more interiority. He encouraged us to move more along the path of revitalization. And he pointed out that there will be much from these days to reflect on later, much to unpack from this rich Chapter. He expressed his gladness that the Papal audience had gone so well – this had been our 3rd attempt after two cancelations at the last couple General Chapters. We expressed our gratitude to him with prolonged applause, and he officially closed the General Chapter of 2017 around 11:40. What a blessing to have been part of it.

In chapter this morning Fr. Stephen gave us a virtual tour of Assisi and the General Chapter along with the papal audience in Rome. The photos are available on the photo gallery on the Order’s web site at: Assisi 2017 – OCSO.  Next Sunday Fr. Gerard will give a detailed report of some of the issues dealt with by the Chapter. 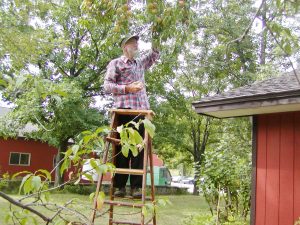 This summer the community refectory has been amply supplied with vegetables and fruits thanks to the single-handed efforts of Br. David Wilson hard at work in our vegetable garden and single fruit tree. Here we see him harvesting a plentiful supply of peaches that disappeared quickly from the table.

Two things are immediately clear from the words of this petition: God has a will with and for us and it must become the measure of our willing and being; and the essence of “heaven” is that it is where God’s will is unnervingly done.

Or, to put it in somewhat different terms, where God’s will is done is heaven. The essence of heaven is oneness with God’s will, the oneness of will and truth.

Earth becomes “heaven” when and insofar as God’s will is done there; and it is merely “earth”, the opposite of heaven, when and insofar as it withdraws from the will of God. This is why we pray that it may be done on earth as it is in heaven-that earth may become “heaven”.