Cistercian Liturgical Ordo
Those who follow the Cistercian Ordo for the Liturgy of the Hours and Mass will find the 2017-2018 version posted on the Order’s web site at: ENGLISH ORDO and LATIN ORDO.

Daily Schedule
During this time of experimentation with our schedule we continue fine tuning the times for the liturgical celebrations. The latest update is for Christmas mid-night Mass which was formerly celebrated at 1:20 AM Christmas Eve. After a community discussion it was decided to change the time to mid-night on Christmas Eve this year. Note that the Christmas Office of the Vigil of Christmas is integrated with the Vigil Mass extending the time another half hour or so.

The experiment runs until December 31st at which time the community will vote on whether to make the changes permanent or return to the former schedule. My hunch is: permanent!!

Speaking of schedule with this Friday the 1st of December we’re reminded that the following Friday, December 8th, we will be celebrating the Solemnity of Our Lady’s Immaculate Conception, patronal feast of the United States and a holy day of obligation. Mass will be celebrated at 10:00 AM on that day

The glory and nobility of God’s eternal Kingdom have to be estimated from the dignity of its King, since a king is not 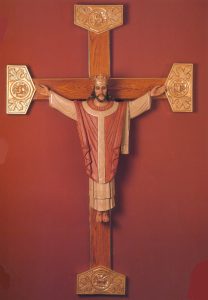 And he indeed is King who has on his garment and on his thigh a name written: King of kings and Lord of lords (Apoc. 19:16), whose power is everlasting power that shall  not be taken away (Dan. 7:14), whose kingdom will not be destroyed and whom all tribes ad peoples and tongues (Apoc. 7:9) will serve throughout eternity. He is truly a peaceable (1 Chron. 22:9) King, whose countenance both heaven and all the earth desire to look upon  (1Kings 10:24).

In this eternal kingdom, all good and perfect gifts come down in plenty and abundance from the Father of Lights (James 1:17) through Jesus Christ, who is the superessential Ray and who since he is one, can do all things, and renews all things (Wisd. 7:27).

The Tree of Life
St. Bonaventure