Schedule Change
This Thursday, May 10th, is Ascension Thursday, a Holy Day of Obligation. Mass will be at 10:00. See Daily Liturgical Schedule for complete schedule. 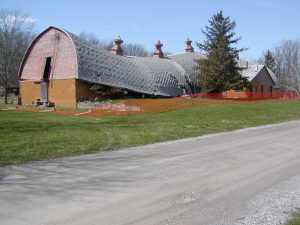 Actually it has been out for many years. Out of operation that is. Now it is falling down. The dairy barn completed in the mid  ’50’s was in operation until sometime in the 60’s or 70’s when it was decided to disperse the herd. At that time we had to make the difficult choice between maintaining a large dairy herd or developing Monks’ Bread bakery. It was finally decided to go with the bakery. 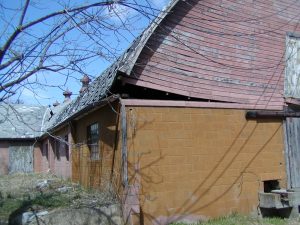 Since that time the barn remained empty except for some storage and we often talked about dismantling it. Because of the work involved in tearing it down we kept postponing the job so Mother Nature got things going for us. It seems the roof developed leaks that caused the collapse of the bearing walls and down it came. The rest will be up to us.

Medieval Institute
Tomorrow Fr. Isaac will depart for the annual meeting of the  International Congress on Medieval Studies to be held at Western Michigan University. As a member of the advisory board of the Center for Cistercian and Monastic Studies of the Medieval Institute at Western Michigan University. The Board meets annually at the International Congress on next Sunday.

Obedience to his commandments is indeed the only available means that believers have of manifesting their love for him. Nothing else can or will do.

It is by obeying his commandments that the believers manifest to the world that he is in them and they in him (John 14:20): that they are his disciples (John 13:35). They will show the world that they truly live because he, their risen Lord, lives (John 14:19).