June – Favorite Month
Not only are gardens and woods blooming and blossoming but June also brings with it the birth of the season’s wild life including new born fawn always a delight to see if one is lucky enough to spot one. More importantly though it is a month of celebration.

We begin the celebrations on this last Sunday of May, with the Solemnity of the Holy Trinity which is also the third anniversary of our Abbot Gerard’s installation as our newly elected Abbot. Next Sunday it will be the Solemnity of Corpus Christi followed by the Solemnity of the Sacred Heart of Jesus the Friday after with Solemnities of the Nativity of John the Baptist on the 23rd and Sts. Peter and Paul on the 28th. As the saying goes, when we fast we fast and when we feast we feast!!

Vocation Retreat Weekend
Over the past Memorial Day weekend we held our 10th Vocation Retreat Weekend for those discerning their vocation. At one point we had six retreatants registered but due to last minute cancellations four participated in the retreat. As with past vocation retreats it seems to have been well received by everyone. Especially appreciated was joining the community for liturgy in choir and for meals Saturday and Sunday. And the community was glad to have them join us.  We now leave it up to the Holy Spirit to water with his grace the seeds that have been sown.

Anyone wrestling with the usual difficulties involved in making vocational choices in their life might profit reflecting on Fr. Gerard’s homily delivered at Mass on Saturday. It can be found on our Homilies Page. 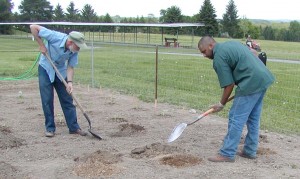 . . .spring has arrived bringing with it much work to be done outside. Actually it seems more like instant summer with temperatures in the 80’s already. Along with tending lawns and fields our cellarer, Br. David, is planting a sizeable vegetable garden for the community. Here he is hard at work assisted by Samuel, our observer. Alongside the garden he also planted some fruit trees but ourlocal deer population got to them before he had a chance to fence them in. Hopefully they’ll make a quick come back.

While they were tending the garden novice Brother Joseph can be seen behind Samuel keeping the surrounding lawn under control.

The mystery of the Most Holy Trinity is the central mystery of Christian faith and life. It is the mystery of God in himself. It is therefore the source of all the other mysteries of faith, the light that enlightens them. It is the most fundamental and essential teaching in the hierarchy of the truths of faith.

The whole history of salvation is identical with the history of the way and the means by which the one true God, Father, Son and Holy Spirit reveals himself to men and reconciles and unites with himself those who turn away from sin.

Catechism of the Catholic Church