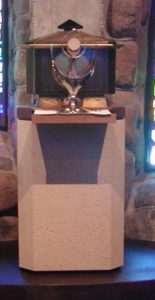 Corpus Christi
As the invitatory for today’s office of vigils invites us we we join the Universal Church in the celebration of the Eucharistic presence of Jesus in the Blessed Sacrament.

Anniversaries
This past Thursday we quietly celebrated the 65th anniversary of the foundation of Genesee. This weekend we held our 13th Vocational Retreat with two young men participating, both in their early twenties. During the evaluation at the end of the weekend both reported a positive experience, especially joining the community for choir and meals and interaction with those giving conferences. One felt it was a little too short and recommended a longer stay. Actually we are reevaluating our program and may come up with a different format shortly based on our experience and that of other communities. We’ll keep you posted. Meanwhile, we continue praying for vocations.

Postulant’s Arrival
Yesterday we were happy to welcome Randy Larkin, 29 years of age, back into the community to continue his postulancy after a period of discernment. To mark his new beginnings he has chosen the name Br. Placid. Little is known of  St. Placid except that he was a disciple of St. Benedict. He was the son of the patrician Tertullus and was brought as a child to St. Benedict at Subiaco and dedicated to God as an oblate as provided for in chapter 69 of the Rule of St. Benedict.

The Dialogues of St. Gregory the Great relate the incident of his rescue from drowning when his fellow monk, St. Maurus, at St. Benedict’s order ran across the surface of the lake below the monastery and drew him safely to shore. He accompanied St. Benedict about 529 when he moved to Monte Cassino which was said to have been made over to him by Placid’s father.

Nothing is known of his later life except that in an ancient psalter at Vallombrosa his name is found in the Litany of the Saints placed among the confessors immediately after those of St. Benedict and St. Maurus.

Since it was the will of God’s only-begotten Son that mortals should share in his divinity, he assumed our nature in order that by becoming human he might make us divine. Moreover, when he took our flesh he dedicated the whole of its substance to our salvation.

He offered his body to God the Father on the altar of the cross as a sacrifice for our reconciliation. He shed his blood for our ransom and purification, so that we might be redeemed from our wretched state of bondage and cleansed from all son.

But to ensure that the memory of so great a gift would abide with us forever, he left his body as food and his blood as drink for the faithful to consume in the form of bread and wine.

It was to impress the vastness of his love more firmly upon the hearts of the faithful that Our Lord instituted this sacrament at the Last Supper. As he was on the point of departing this world to go to the Father, after celebrating the Passover with his disciples, he bequeathed it as a perpetual memorial of his passion.

It was the fulfillment of ancient figures and the greatest of all his miracles, while for those who were to experience the sorrow of his departure, it was destined to be a unique and abiding consolation.

From a Work About the Eucharist
St. Thomas Aquinas