Passing Through
Last Sunday we were pleased to receive three juniors, Bros. Matthias, Abel & Joseph from our mother house, Gethsemani Abbey, for an overnight stop over. They were driving from Kentucky to St. Mary’s Abbey, Wrentham Massachusetts for a Regional OCSO’s Junior Meeting and stopped for the night on their way. We look forward to their return on June 1st for an overnight on their way back.

Silver Jubilee
This past Tuesday, May 21st, we had the gala celebration of our novice, Fr. John Vianney (Gregory) Hamill’s 25th 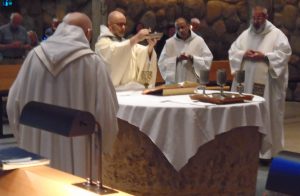 anniversary of priestly ordination. For the first time since 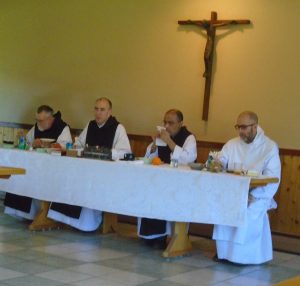 his entrance two and a half years ago he was principal celebrant at the Mass and gave his inaugural homily. This was followed by a feast day dinner in his honor. In good Trappist style he did his duties in the specialty bakery in between. 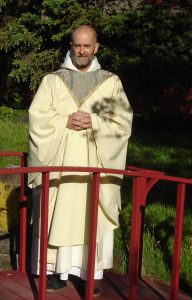 Fr. John Vianney was born in Philadelphia, and was ordained for the diocese of Philadelphia. Among his assignments was that of pastor of Sacred Heart parish in Oxford, PA for six years.

The previous weekend he welcomed family and friends, including his lively 90 year old mother, for a family celebration. He said private Mass for them at Bethlehem Retreat House followed by a home cooked festive meal worthy of the occasion at Bethany House. Ad multos annos, Fr. John Vianney!

On August the, Feast of the Transfiguration, he will profess his first vows as a junior and move from the novitiate to the professed side of the house.

Church Entrance
Earlier this week work began replacing the sidewalk to the entrance of the Church. The concrete was 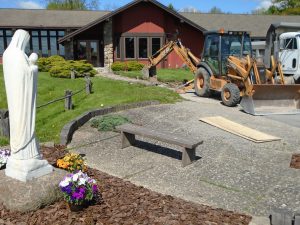 badly pitted from the salt and other chemicals used to melt 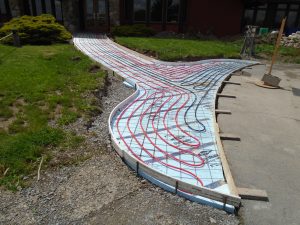 snow and ice. The surface was becoming quite hazardous as the cement dropped lower than the slate slabs that were distributed throughout the walk making it possible to trip and making it quite bumpy for walkers and wheelchairs. Hopefully the hot water heating pipes buried in the sidewalk will eliminate the accumulation of snow and ice.

How could we ever believe if Jesus himself did not take the initiative to make it happen? How could we recognize Jesus in the sacrament of his body and blood if he himself did not invite us to do this and if he did not tenderly wound our heart at the moment we received him?

How would we find the Risen One in his Word if he himself did not open our mind and set our heart on fire every time he spoke to us through the Scriptures? In our own heart, which leaps up with joy, we recognize Jesus, the Jesus who is risen and still lives, even in our midst.