Tune Up
This past week we were grateful to have Fr. Emmanuel of Spencer, the community’s guest-master and choir director, with us.  He isa gifted musician well versed in Gregorian chant as well as guest-master and photographer. During the week he met with our cantors, schola and the community for choir practice.

During the course of the week he pointed out several areas in our chant that need to be improved upon. As he politely put it  in need of ‘tuning up a bit’. Good choir director that he is he gave us plenty of home work to do.

Retreat Director
This morning after Vigils Fr. John Denburger made an early departure heading for St. Meinrad’s Archabbey, a Benedictine community of 90 monks in St. Meinrad, Indiana where he will be giving the community their annual retreat. He is due to return this Saturday, May 27th.

Celebrations
We look forward to the celebration of  the Ascension of Our Lord on Thursday of this week. For those of us celebrating the feast on Thursday instead of the following Sunday it will be a holy day of obligation.  (NOTE: Mass will be at 9:30.) Many Christians keep a nine day novena in preparation for the celebration of Pentecost Sunday. The Pentecost novena is the original novena. After Christ’s ascension into heaven, the disciples prayed for nine days for the Spirit to come upon them. On the tenth day, Pentecost Sunday, they received the Holy Spirit as promised by our Lord.

The internet has a long list of novena web sites. Among them is a suggested program for the novena on NOVENA TO THE HOLY SPIRIT site for those who are interested in praying it.

This year the day after Ascension Thursday, May 26, marks the 66th anniversary of the foundation of Our Lady of the Genesee. 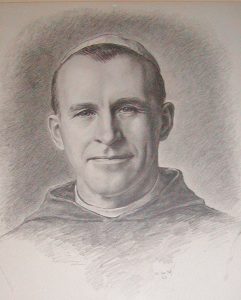 From the very beginning under the charismatic leadership of its first Abbot, Dom Gerard McGinley, the community prospered so much so that it was raised from the status of a foundation to that of abbey in record time on September 13, 1953.

Before long tragedy struck when at noon on September 19, 1955 the community received the following telegram from Dijon, France where Dom Gerard was attending his first general chapter: Your Reverend Father died Monday morning about four thirty. The community has long since recovered from its loss no doubt in great measure to the intercession of Dom Gerard.

Jesus’ death on the cross was a sacrifice of expiation; it makes us understand both the gravity of sin as a rebellion against God and a rejection of his love, and the marvelous saving work of Christ which was offered humanity and which has restored us to grace and therefore to participation in God’s Trinitarian life and to the inheritance of eternal happiness.

Jesus’ passion and death on the cross give us the true and definitive meaning of life where the redemption is already realized in the perspective of eternity. Just as Christ is risen, so too we will rise in glory, if we have accepted his message and mission.