Birthday of the Church
Today, Pentecost Sunday, is traditionally celebrated as the Birthday of the Church when the disciples of Jesus came out from hiding behind closed doors preaching the Good News to all the world. For Christians, it  is a holiday on which we commemorate the coming of the Holy Spirit on the early followers of Jesus. Before the events of the first Pentecost, which came a few weeks after Jesus’ death and resurrection, there were followers of Jesus, but no movement that could be meaningfully called “the church.” Thus, from an historical point of view, Pentecost is the day on which the church was started. This is also true from a spiritual perspective, since the Spirit brings the church into existence and enlivens it. Thus Pentecost is the church’s birthday.

As an alternate entrance antiphon for the day has it: the love of God has been poured into our hearts by his Spirit living in us alleluia! 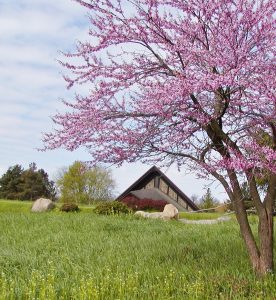 Home From Michigan
Yesterday Fr. Isaac returned from Kalamazoo and the 51st Annual Medieval Institute held there this week. Hosted by Western Michigan University’s Medieval Institute, the International Congress on Medieval Studies is an annual gathering of around 3,000 scholars interested in medieval studies. The congress features  550-575 sessions of papers, panel discussions, round tables, workshops and performances. There are also some 100 business meetings and receptions sponsored by learned societies, associations and institutions. The exhibits hall boasts nearly 70 exhibitors, including publishers, used book dealers and purveyors of medieval sundries. The congress lasts three and a half days, extending from Thursday morning, with sessions beginning at 10 a.m., until Sunday at noon.

Continuing Discernment
As his first year of novitiate drew to a close it was discerned that Br. Joseph Bruno wasn’t being called to monastic life here at Genesee. He returned home this past Monday. While everyone is saddened by his departure we are confident he is following God’s mysterious will and for that we are grateful. May God bless and guide him in his continuing discernment.

Off to Novice Master Meeting
It will probably be at least two, maybe three weeks before the next Abbey News & Homilies update appears as tomorrow I will be driving over to St. Joseph’s Abbey, Spencer, Massachusetts for the OCSO Regional Novice Masters meeting which is held every two years. I plan on returning late Wednesday the 25th. The previous meeting was held here at Genesee. The very weekend of my return we will have our Memorial Day Weekend Vocation Retreat which will keep me occupied a good deal. Do keep the successful outcome of the Meeting and Retreat Weekend in your good prayers.

God, besides being eternal Life, is Wisdom: Wisdom which substantiates all wisdom, transcends all wisdom, exceeds any possibility of comprehension. Indeed, not only does God overflow with wisdom and there is no limit to his wisdom (Ps. 147:5) He transcends all mind, all intelligence, all wisdom as well. This is what Paul amazingly understood when he wrote: The folly of God is wiser than human wisdom (1st Cor. 1:25).

On the other hand, the divine Wisdom is the cause of all intelligence, of all wisdom, of every possibility of comprehension. From it souls receive the power to reflect, that is, the power to approach in thought and, as it were, sail close to the very truth of things, and the power to reduce multiplicity to unity.

On the Divine Names
Pseudo-Dionysius the Areopagite