At Last
Last week we were able to report final clean up of new Abbey Bread store. This week we are able to report opening day this past Tuesday, March 19th, in honor of good St. Joseph. After a rather frenzied moving day on Monday under the able direction of  store manager, Minh and her dedicated helpers, most everything was in place by the end of the day.

There are several details that remain to be finished as time goes on pointing to the fact that store management is always a work in progress. Thus far customers have been offering rave reviews about the new location and arrangements.The formal opening and blessing will be Saturday, May 4th to thank our generous donors. More about that later. 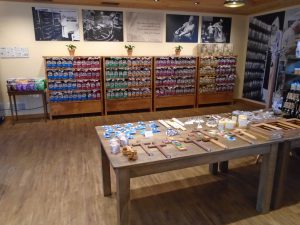 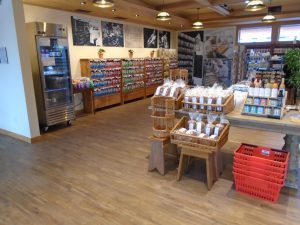 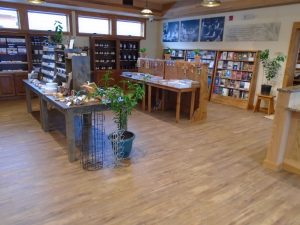 There are several details that remain to be finished as time goes on pointing to the fact that a store manager’s work is never done. Thus far customers have been offering rave reviews about the new location and arrangements.

And Then. . .
. . .a few days later Merton Hall, next to the store, was ready for occupancy and was host to a few small student group. The arrangement you see here can be used for a variety of meetings for the community, retreatants and small groups. 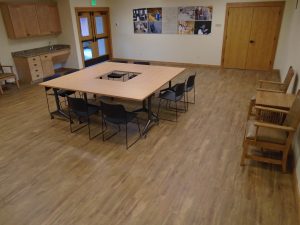 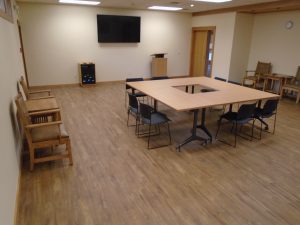 Whenever we have large groups the tables can be folded and set aside and chairs can be set around facing the speaker. We have capacity for up to 50 people.
NOTE: IT IS NECESSARY TO MAKE ADVANCE RESERVATIONS FOR THE USE OF MERTON HALL. WE DO NOT RECEIVE  GROUPS ON SATURDAYS OR SUNDAYS. TO MAKE A RESERVATION CONTACT GROUP VISIT .

Human beings are creatures of habit, often unconscious habit. If we do anything repeatedly, we will begin to do it in the same way, time after time. Our prayers can also assume a familiar pattern. We may become so comfortable with this pattern that we end up thinking that it is the only to pray or the only way we can pray.

However, when we note in the Gospels how Jesus prayed, we discover that he prayed in a great variety of ways. Most of Jesus’ prayers were spontaneous prayers, appropriate to the moment. But Jesus also made full use of his Jewish heritage and prayed the psalms.

Both traditional prayers and spontaneous prayers had a place in Jesus’ prayer life, and they have a place in the prayer life of his followers as well.