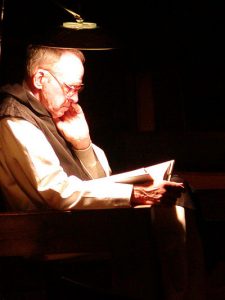 Our week of silent retreat is over, much too quickly for some. Though the rarefied schedule takes a bit of getting used to is, once one has adapted to it, something he is sorry to see end.  Especially appreciated is the extra time given to ‘lectio’ and private prayer. But end it must though we hope the graces received will remain for a long time to come.

One of the ‘treat’ aspects of this year’s retreat were the community dinners provided by the Bethlehem Retreat House staff giving the community cooks a bit of time off. Now we have a better idea why retreatants often give rave reviews of the meals during their retreats.

Progress Report
As mentioned in the previous Abbey News the renovation project for the Abbey Store and Welcome Center is moving right along. The Building Community is meeting regularly working on concepts and design. Our design consultants, Heather DeMoras Design Consultants of Rochester, have come up with some photos of the concepts so far. They were originally shown to the Committee in three dimensional photos.

Fr. Jerome, who updates the Progress Report page regularly, has included some of them in his latest update. You will find them at Renovations Progress Report: New Store and Welcome Center.

The present, radiant day of the Transfiguration, according to the grace granted us by the transfigured Christ, invites us to present to your charity the mystery of the feast. For once we have learned the meaning of the mystery, we may celebrate the Transfiguration of Christ not only with sacred hymns but also with virtuous conduct.

This indeed is the meaning of the feast, namely, that we recognize the gift of which we have been deemed worthy, and that we reveal its treasure through our progress in good works, revering the feast both in our lives and in our words.

The person who spends his life in the company of self-discipline and proceeds according to the commandments of Christ, disdaining the pleasures of the body, is seen to be like Peter, a faithful and fervent disciple of the Lord.

And someone who puts worldliness to death, abolishes carnal thoughts and prepares himself for afflictions on behalf of the Gospel, who reproves those living evil lives and yet bears with their evil deeds for the sake of the truth, such a man manifests the zeal of James.

Ant in turn he who has made his mind a dwelling place of the sacred scriptures, is consumed with meditating on divine realities, and ponders over the reasons of nature in order to comprehend the truth: such a person imitates the way of John.