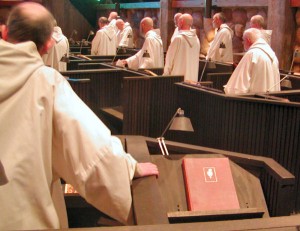 The official prayer of the Roman Catholic Church is known variously as Liturgy of the Hours, Divine Office, Opus Dei (Work of God). The roots of this prayer go all the way back to Jewish practices before the time of our Lord. This form of prayer was prayed by Jesus and his disciples. As such, it was carried over into the devotion of the early Christian Church and continues in an unbroken tradition down to our own day.

In both the Jewish and Christian traditions, this work of God was the prayer of all the people, clergy and laity. Due to various circumstances however, in the Christian Church it soon became the particular prayer of clergy and monks for many centuries. One of the blessings flowing from the liturgical reforms of Vatican II is the resurgence of the Divine Office among the laity. For our purposes we will refer to this form of prayer as the Work of God since that is the traditional Benedictine term.

According to the Constitutions of our Order: “‘Nothing is to be preferred to the Work of God. Accordingly, the Liturgy of the Hours is to be celebrated by the community which, in union with the Church, fulfills Christ’s priestly function offering to God a sacrifice of praise and making intercession for the salvation of the whole world.” Constitution 19.1. The Constitutions go on to situate the Work of God among the other components of monastic life when they continue, “The Liturgy of the Hours is a school of continual prayer and an outstanding component of the monastic way of life. It is the abbot’s duty to promote zeal for the Work of God among the brothers.” Constitution 19.2

Here at Genesee we strive to maintain the traditional character of each hour of the Work of God by celebrating it at as close to its proper time as we are able. In this manner it consecrates to God the cycle of night and day, the liturgical seasons and the whole gamut of human activity. It is also the chief means for achieving incessant prayer, mindfulness of God and transformation in Christ. As it was once said of Little St. Placid: “The liturgy put into his mouth words he never dared utter. His words formed his thoughts and this thought formed his being.” We hope this little explanation of the meaning of the various hours of prayer will enrich your own appreciation of the Work of God.

Vigils, or watching in the night, is prayer to be celebrated in the middle of the night during which we meditate on salvation history as it unfolded down through the ages. The office of Vigils consists of a hymn, psalms, readings, scriptural and patristic, and canticles suitable to the spirit of the midnight hour when one awaits the arrival of the Bridegroom (Mt 25:6; Mk 13:35). In monastic communities the concentration on vigilance begun with this office continues until lauds. Monastics spend this time enveloped in and supported by darkness and silence in lectio divina,prayer and meditation.

Lauds is celebrated at daybreak when the sun is dispelling the night and the new day is born. The Church has always considered the sun to be a symbol of Christ rising from the dead. This prayer is called Lauds because it is a laudatory liturgy of praise in the early morning light. We thank God for the first light at the beginning of creation and for the second light of our redemption in Christ’s paschal victory. This prayer breathes the atmosphere of bright youth, of beginning, of innocence, of blossoming spring. It is a joyful, optimistic hour reflected by the hymn, psalms and canticles.

Terce, a Latin term for third hour, is prayed at mid-morning. It is a shorter prayer referred to as one of the little hours. Traditionally it is dedicated to the coming of the Holy Spirit which took place at mid-morning in the account found in the Acts of the Apostles. One prays for light and strength as the day waxes strong and one’s work begins.

Sext, another of the little hours, is Latin for the sixth hour. It takes place at midday when the sun is at its apex and one has become a bit weary and mindfulness is all but impossible. It is a time for earnest prayer to resist temptation, to keep from being overcome by the demands and pressures of life. We are reminded of Christ being crucified at the sixth hour and we unite ourselves with Him. One is aware of one’s failures and mistakes and prays for deep and abiding conversion even to the point of sacrifice.

None, refers to the ninth hour, roughly mid-afternoon, and is the third of the little hours. It is a time to pray for perseverance, to pray for the strength to continue bearing fruit as one reaches one’s prime and needs to keep going. It is a time when one becomes aware of the sun’s gradual descent and the strength one needs to cope with the demands and responsibilities of life.

Vespers, celebrated at day’s end, takes on the character of evening. The day is almost over, our work is done. The golden evening light is like old, mature wine, and in some late summer and autumn days it is like gold, transfiguring our world and making it transparent for God. This is the hour of wise age, of resting in thanksgiving and humility after the struggles, successes and failures of the day of one’s productive life. There are appropriate hymns, psalms, readings and canticles for celebrating this vesper hour.

Compline comes from the Latin which means to complete. It is the last common prayer before retiring for the night. It marks the completion of our day and heralds life’s end. It leads back into the darkness of the night, but a darkness different from that of vigils. It is not the darkness of waiting where all the possibilities of good and evil were still ahead. This is the darkness of God’s mysterious presence, the abyss of his mercy into which he let us fall. Compline may be understood as a daily exercise in the art of dying. For what is sleep if not a little rehearsal for death? But dying a death which will open the fullness of life and light. That is why the cantor sings the wonderful song of old Simeon on the threshold of death: “Now Lord, you will let your servant go in peace, according to your word, for my eyes have seen your saving deed which you have set before all: a light for revelation to the Gentiles, and for the glory to your people Israel.” (Luke 2:29-32).

Here at Genesee we have a unique, one-week cycle of the psalms for our Divine Office, arranged by Fr. Justin. Those of you who may like to join us in praying the same psalms as we do at a particular hour of the liturgy will find our arrangement at our Psalms Page.

Together with the daily concelebrated Mass, for which it is preparation and extension, the Work of God takes us into the mystery of Our Lord’s death and resurrection and holds us there sanctifying our lives and all we do.