SCHEDULE CHANGE – FRIDAY, JUNE 28th
SOLEMNITY OF THE SACRED HEART
MASS 10:00 – FOLLOWED BY
EXPOSITION OF THE BLESSED SACRAMENT
UNTIL VESPERS

Week of Solemnities
Today it’s the celebration of the Solemnity of Corpus Christi. After the 10:00 Mass there will be a 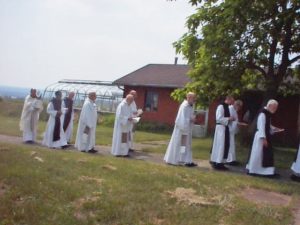 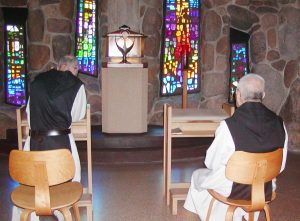 Then on Monday we will celebrate the Solemnity of St. John the Baptist with the usual feast day fare. This will be followed by the Solemnity of the Sacred Heart (as mentioned above) with 10:00 Mass followed by exposition of the Blessed Sacrament until Vespers and Benediction. Finally, on Saturday it will be the Solemnity of Saints Peter and Paul. No wonder the month of June is a favorite for many!

Second Delay
Originally Fr. Gerard was scheduled to return from the Central Commission Meeting today in time for Mass but the flight was changed so that he would return sometime later during Mass. The latest word is that there was trouble with flights from Europe and now he is scheduled to be back by around 7:00 tonight. No doubt he will be glad to be back home.

Another Departure
Wednesday morning our Prior, Fr. Isaac, will depart for the monastery of Awhum, our daughter house in Nigeria. He has been assigned to accompany Abbot Bernardo Bonowitz of our daughter house in Brazil to make the regular visitation of the community as co-visitator. He is scheduled to return in about three weeks. Hopefully.

The way to make this relationship with Christ all that it should be is through a personal devotion to the person of our Lord. It is a particular devotion to him under the form that he himself has asked for, namely, to his Sacred Heart.