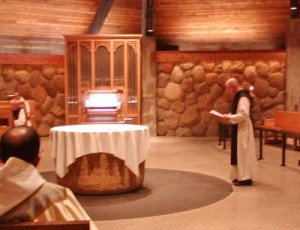 Along with joyfully celebrating the Solemnity of the Sacred Heart this past Friday we also had the joy of receiving Br. David Baumbauch as a permanent member of our community. Formally a member of Holy Trinity Abbey, Huntsville, Utah for many years he took the option of transferring to our community as a result of his community’s closing down. Whenever a community disbands all the members have the option of applying to another community of the Order and Br. David chose Genesee.

Having entered Trinity 41 years ago he was already in solemn vows at the time of his transfer so all he needed to do was make a vow of stability to his new community. Before doing so a one year probation community was required at the end of which the community voted whether or not to accept him. It came as no surprised that his vote was very positive. 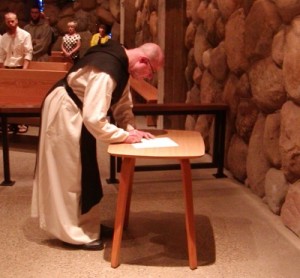 The Benedictine vow of stability is really a covenant vow whereby the candidate vows to be with the community for the rest of his life and the community agrees to accept him as a permanent member.

The ceremony takes place, significantly enough, during the offertory of the community Mass. In the chapter room before Mass began in the abbey church Br. David made his lifetime vow of obedience to Abbot Gerard and his successors.

The accompanying photos show 1) Br. David reading his vow at the beginning of the offertory, 2)signing the vow formula, 3) being received and welcomed by each of the solemnly professed brothers of the community. All in all a happy occasion for us all.

St. John’s Abbey web page has a brief description of the Benedictine vows including stability. You’ll find it on their Monastic Vows page. 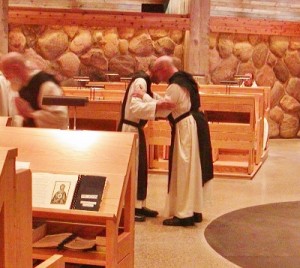 Tomorrow, our prior, Fr. Isaac will travel to the Abbey of New Clairvaux, Vina, California to participate in the St. Bernard Congress in honor of the 900th anniversary of the founding of Clairvaux Abbey in France founded by St. Bernard. Participating in the Congress will be Bernardine scholars from throughout the Order presenting papers on Bernardine subjects.

It was in 1112 that Bernard of Fontaine along with 30 of his relatives and friends entered the monastery of Citeaux, the Motherhouse of the Cistercians. Drawn by a great love for the Rule of Benedict, Bernard grew to be a great influential leader, but above all, he was a learned and experienced spiritual master whose sermons on the Song of Songs continues to be read by those who seek a close, intimate knowledge of God. Later as abbot of Clairvaux Abbey in France, Bernard bequeathed to future generations of Cistercian monks numerous tomes of sermons, treatises, commentaries and letters that have been tranlsated into English and many other languages. Fr. Isaac will return Saturday the 20th eager, no doubt, to share with us the fruits of the Congress.

By definition, the believer must become a disciple or, rather, is constituted as disciple by the very act of believing, since faith at its root is nothing other than the human response, prompted by grace, to the call of God in Christ.

Although discipleship may be lived in widely differing ways and growth in discipleship is a never-ending affair, every person without exception is called to be a disciple of Jesus, and the Kingdom belongs to none but disciples.

If this were not so, Jesus would not be the Son of God and the Son of Man – the King of glory whose universal kingship the Roman Rite solemnly celebrates on the last Sunday of Ordinary Time