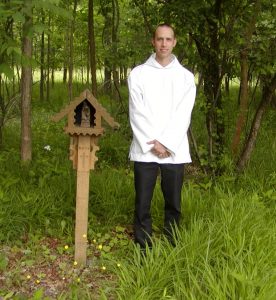 On Saturday, May 28th, we happily received Randy Larkin back into the community to begin his postulancy as Br. Placid. This past Friday he received the postulant’s smock from Abbot Gerard. The hooded white smock is an update of the former postulant’s habit of a full length white robe without hood which always appeared to have something missing. In addition to helping one stay warm in colder weather the monastic hood is a help in focusing one’s attention during prayer and lectio.

Br. Placid, twenty-eight years of age, comes to us from the rural New York village of Earlville.  He comes laden with degrees in Agricultural Mechanics and Music Education and facility playing piano, trumpet and guitar along with a good deal of farming experience and general maintenance.

St. Placid is a little known saint outside of monastic circles. You will find some information about him on Wikepedia, St. Placidus. In the Roman Sanctoral cycle his feast is celebrated on October 5th whereas in the Benedictine cycle it is celebrated on January 15th along with his companion, St. Maur.

His arrival brings our novitiate population to two with a third due to arrive at the end of the month pending approval of his visa. All three candidates worthy of your prayerful support.

Paris Remembers the Trappists of Tibhirine 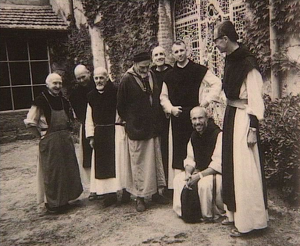 Recent post on Order of St. Benedict news web site: DIMMID reports that “On Monday, 30 May 2016, the city of Paris dedicated a garden in honor of the seven monks of Tibhirine who were kidnapped and then assassinated in 1996. By doing so, the organizers of the event intended to pay tribute to their ‘message of friendship and openness to dialogue’ with Muslims.” Anne Hidalgo, the mayor of Paris, led the ceremony.

If you are not familiar with the abduction and murder of the seven monks of Tibhirine you will find a brief article at Legacy of Slain Monks. . .

In solitude fear and anger can slowly be unmasked as manifestations of a false self, and in solitude they can lose their power in the embrace of God’s love. That is what St. John means when he says: In love there can be no fear, but fear is driven out by perfect love (1 John 4:18).

In solitude we can gradually be led to the truth that we are who God made us to be. Therefore, solitude is a place of conversion. There we are converted from people who want to show each other what we have and what we can do into people who raise our open and empty hands to God in the recognition that all we are is a free gift from God.

Thus , in solitude we encounter not only God but also our true self. In fact, it is precisely in the light of God’s presence that we can see who we really are.