Abbatial Absence
Tomorrow morning Abbot Gerard will leave for the U. S. Regional Meeting of Superiors. He will be accompanied by the community’s elected Delegate, Fr. Stephen. They will be setting out for our mother house, Gethsemani, where the meeting will be held.

There are twelve Regions of the Order constituting of 169 monasteries organized according to the various languages throughout the Order. Normally they are held shortly before the General Chapter is convened to help prepare the agenda for the Chapter. The next General Chapter will be in the autumn of 2017. They also provide an opportunity for superiors to meet to deal with local problems and developments and provide pastoral support where needed.

In recent years each community has been invited to send a delegate to accompany the superior. At the meeting the delegates will vote upon one of their number to represent the Region at the next General Chapter. Abbot Gerard and Father Stephen are due to return late in the afternoon of Monday, February the 8th.

BUILDING COMMITTEE
Moving ahead with the reception room renovation project the building committee was organized this past week with two appointed members, Bros. David Wilson and David Baumbach and two members elected by the community, Bros. James and Anthony. Where we go from here remains to be seen.

Around the Corner
Ready or not here comes Lent with Ash Wednesday falling on February 10th this year. For the next week or so the brethren will be busy selecting their 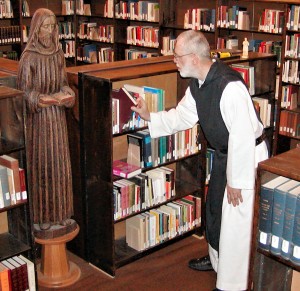 Lenten reading books which will be passed out on the first Sunday of Lent.

Meanwhile, we’ll be celebrating the Feast of the Presentation of Our Lord on Tuesday February 2nd the day on  which Pope Francis will close the Year of Consecrated Life.  followed by the hermit day for the month on the next day.

Contemplation is the capacity to steep ourselves in the present, to look at the world and others in an entirely open way, so freely and disinterestedly that it can easily penetrate to the heart of reality.

The difference between contemplation and action is that in action, as soon as I see anything, I say, ‘What’s that for? What can I do with it? How can I use it? How much does it cost? Where does it come from?’ This a utilitarian and pragmatic attitude, based on intelligence.

By contrast, contemplation does not seek to know the use of something, what I can do with it, the profit I will gain from it, but is content to look on it with tenderness and love, and that creates the possibility of penetrating slowly right into its depths.

Contemplation is steeped in the present; it is a welcoming of being into itself without any afterthoughts, the love of the other simply for the other’s sake.

Henri Boulard, SJ
All is Grace