Nearly Unanimous
After several discussions over many months we finally voted in favor of moving ahead with the renovation of the reception room and store. 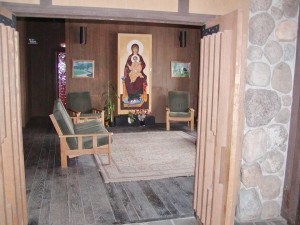 ENTRANCE TO QUIET RECEPTION ROOM NEXT TO STORE AREA

With only one negative vote and one abstention the outcome was certainly clear. The reception room renovation is only part of a larger master plan of renovations that need to be done over the next several years. The vote calls for the appointment of a building committee to draw up general plans for the renovation which will then be voted on by the community. If that is also favorable the next step will be the engagement of an architect to draw up the final detailed plans and contact contractors for the job.

The present combination of reception room and bread store has outgrown its usefulness due to the increased number of patrons visiting the store and the inadequacy of facilities. The preliminary conception calls for separating the busy business area from the quieter reception area and entrance into the Church. An important source of the Abbey’s livelihood the concept calls for moving the store to the other end of the building and enlarging it a bit, making it more efficient. The reception room will remain where it is but will be much more conducive to those spending some quiet time at the Abbey and a quieter more contemplative entrance into the Church. 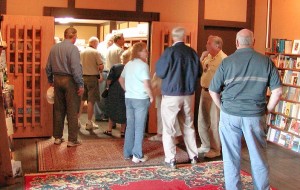 Most likely there will be another entrance to the store at the other end of the building with a passageway to the reception room and Church. Merton Hall for receiving groups will also be enlarged a bit, so too the rooms for confessions and visiting. The present bathroom facilities are to be enlarged as they are now wholly inadequate for even small groups to say nothing of bus tours visiting the Abbey.

The job should be relatively simple all things considered since it will not require major alterations of the building itself. While we were considering the approximate cost and whether or not we could afford it a dear friend of the Abbey, who most of us do not even know, bequeathed a generous donation in her will which amounts to just about the estimated cost of the building. One can easily see that as an indication of God’s blessing on the project. The renovated reception room/store will be dedicated to her memory.

Sunday Chapter Presentation
Following directives from the Holy See and our Abbot General all of our communities have been asked to draw up a Code of Conduct regarding the observance of the monastic enclosure and the manner of dealing with visitors, especially youngsters. In this morning’s chapter Fr. Jerome made a power point presentation of our community’s Code of Conduct. Each member has received a copy. After reading it through each member will hand in a signed document agreeing to abide by it.

DAY OF CELEBRATION
This Tuesday we’ll join all our Brothers and Sisters of the Cistercian Order throughout the world celebrating the Solemnity of our Holy Founders, Sts. Robert, Alberic and Stephen, marking 918 years of Cistercian monastic life.

In this decree the aforesaid brethren, taking precaution against future shipwreck of their mutual peace, elucidated and decreed and left for their posterity by what covenant, or in what manner indeed, with what charity their monks throughout the abbeys in various parts of the world, though separated in body, could be indissolubly knit together in mind.

They considered that this decree should be called the Charter of Charity, because averting the burdensome levying of all exactions, its statue pursues only charity and the advantage of souls in things human and divine.