Visitor
On his way back to his monastery of Novo Mundo after preaching a retreat for our sisters at Wrentham, Abbot Bernardo Bonowitz stopped by for a few days visit with us. Novo Mundo in Brazil, Awhum and Illah in Nigeria are our daughter house and he is their acting Father Immediate. 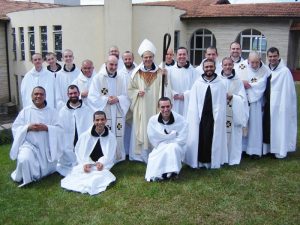 He brought us up to date on the goings on at Novo Mundo which included a report on the remodeling of the Abbey Church which is ready for consecration in February and some of the goings on in the community. We were glad to hear that they now number some 26 community members, mostly Brazilian, and are doing quite well. Also an update on Awhum which now numbers some 70 members, probably one of the largest communities in the Order and also doing well.

The final phase of the erection of the stone columns inside the new welcome center is being completed this week. And that consists of sanding the grout between each stone and giving them a good washing. 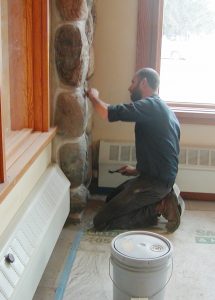 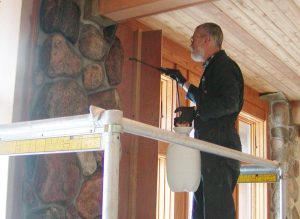 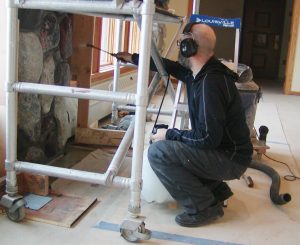 Here we see Br. Placid sanding the grout, Br. David & Fr. John Vianney giving the rocks their final wash. But that’s just the beginning. There will be a great deal of cleaning up after the completion of the electrical wiring, installation of furniture and other odds and ends. Mid February is still a possibility for opening.

No one who comes to me will I reject (John 6:37). That’s our faith. It has to be that the way of prayer, even as a way of suffering, is a better way than the world’s way of smooth and urbane despair. If we pray we’ll be healed, on the deepest level, the level of unbelief.

Faith itself is the only real, and actually the ultimate, victory in this world. Faith brings true peace and true happiness, even if it does not immediately bring the bliss of Heaven.

The Whole Man: Meditations on the Life of Christ
Fr. William Reams, OCSO