Community Dialog
This past week the community had a large group dialog to discuss the community’s house report that is being prepared for the forthcoming General Chapter. The ‘martyr text’ was prepared by Abbot Gerard and his Council and presented to the community for their response.

The primary purpose of the report is to provide the General Chapter of the Order with the overall situation of the community since the last Chapter. But a very important secondary purpose is to give the community the opportunity to have a ‘review of life’ in which various points of observances and developments are brought to light and discussed. 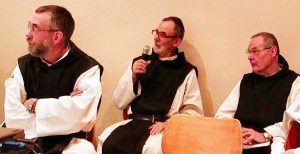 As is usually the case the discussion was lively as both negative and positive issues were raised and reviewed. On the whole the text gave a balanced picture of monastic life here at Genesee and was found to be generally favorable. The text will be discussed again by the Abbot and his Council and amended in the light of the points brought up during the discussion and will be discussed at another community dialog.

Ordinarily the General Chapter is convoked every three years. This year’s Chapter will be held from September 6-27 in Assisi, Italy.

But as long as you pretend to live in pure autonomy, as your own master, without even a god to rule you, you will inevitably live as the servant of anther man or as the alienated member of an organization.

Paradoxically it is the acceptance of God that makes you free and delivers you from the human tyranny, for when you serve Him you are no longer permitted to alienate your spirit in human servitude.

God did not invite the Children of Israel to leave the slavery of Egypt: He  commanded them to do so.