SCHEDULE CHANGE
THURSDAY, AUGUST 15TH
SOLEMNITY OF THE ASSUMPTION OF MARY
SPECIAL PATRONESS OF ALL MONASTERIES OF THE CISTERCIAN ORDER
MASS 10:00

Illah
In our chapter meeting this morning Br. Patrick, formerly of Genesee but now a member of our daughter house, Illah  in Nigeria, gave us an informative update on the community. There have been some difficult problems in the community due to lack of formation but it seems now with the entrance of some younger members more open to monastic formation things are shaping up nicely. 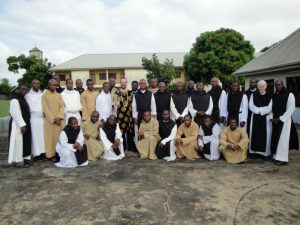 Br. Patrick was a member of Genesee for some 17 years before he was sent to Illah from time to time to help with the monastic formation. Eventually it was decided that he remain there permanently. He is now vocation director and novice master and is doing a fine job of introducing the monastic way of life. Pictured here is the latest photo of the community with Br. Patrick in the second row on the right. To show their appreciation the community made him a chief.

Pilgrims
For several years we have been receiving individuals, small groups and families for private retreats from members of the Neocatehumenal Way in New York. This past Friday morning we received a large group of 162 lively, fervent youthful pilgrims along with their leaders arriving  around 6AM after an all night bus trip in three buses. The Abbey was their first stop on their pilgrimage to various shrines in New York and Canada.

They stayed at Bethany House where they camped out on the ample back lawn and held several activities throughout the day along with the celebration of Mass by their chaplain. Since the group was too large to attend the liturgy at the Abbey all together  it was divided into two: Friday morning the boys attended Sext with the community and Saturday morning the girls attended Lauds after which they departed for the next leg of their pilgrimage. 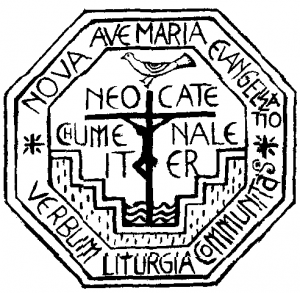 According to an abbreviated article on Wikipedia The Neocatechumenal Way describes itself as a “community,” deprecating terms such as “organization” or “movement,” being “at the service of the Bishops as a form of diocesan implementation of Christian initiation and of ongoing education in faith, in accordance with the indications of the Second Vatican Council and the Magisterium of the Church”. 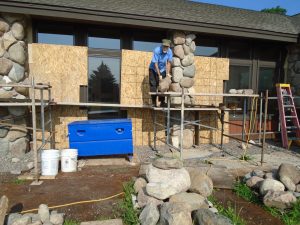 finished. It was designed to match the facade of the church and reception room and seems quite successful thanks to the combined efforts of our contractors and assisted by Br. David.

Here we see Br. David putting one of the final rocks in place. All that remained to be done is pointing between the rocks and wash down.

To exercise faith is to exercise God’s will. In ordinary knowledge our intellect is convinced. In the case of faith, we have to use our will to decide the question. Though our intellect can resist, our will says that God exists and is looking after our welfare.