First Vows
During the Office of Lauds this morning, at the end of the psalmody, our Fr. John Vianney Hamill made 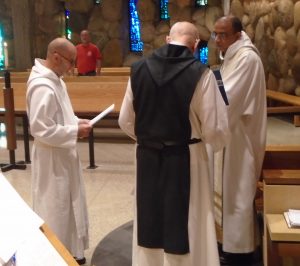 his first profession as a member of the community. The rite began with his asking for the  Blessing of God and of the Order to which Abbot Gerard responded with a blessing asking in part The Lord to grant him fidelity and joy in his monastic life. This was followed by Fr. John Vianney’s kneeling before the Abbot, placing his hands in his and 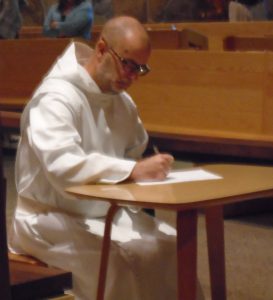 reading the vow formula. Upon signing the document and presenting it to the Abbot he was  clothed in the black scapular and leather belt signifying his status as a vowed member of the community. 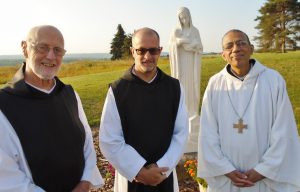 Having made his profession he will leave the novitiate and move to the professed side of the house where Fr. John Denburger will be his mentor for the next three years. The vows will be renewed each year for three years though they can be renewed for six more years if that seems desirable. He will then make his solemn vows for life.

We join the Abbot in his prayer that The Lord bring to perfection the work he has begun in you!

Jesus indeed recommends life-choices which are optional for Christians, as, for example, abstaining from marriage or selling all one’s goods. Not all people are placed under such claims, says Jesus, because the call to such a life is not issued to all – and this aside from any question of guilt.

The pathways can be very unlike each other but there is one main road, one that is not optional. For every disciple of Jesus the journey will always be a cross-bearing journey. The cross is never a matter of choice; it is an integral part of the journey. There is no other choice than the cross that is offered to us all. We have no choice but to accept it. But that is enough.