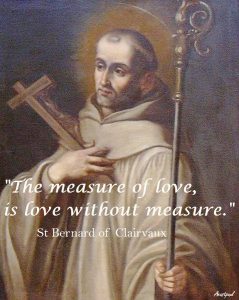 AUGUST 20, 2017
SOLEMNITY OF ST. BERNARD OF CLAIRVAUX
PATRON OF THE CISTERCIAN ORDER 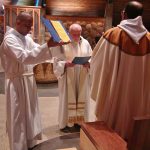 As mentioned last week on Tuesday, August 15th we had the joy of celebrating the 25th anniversary 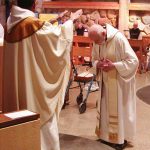 of our Fr. John Denburger’s solemn profession. The high light of the celebration was Fr. John’s renewal of his monastic vows made twenty-five years ago to the day during the community Mass.

After the renewal Abbot Gerard gave Fr. John his solemn blessing while the community and guests offered congratulations with loud clapping. 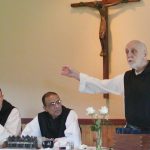 Another high point of the celebration was a feast day dinner in his honor during which he gave a spirited talk to the community.
NOTE: CLICK PHOTOS FOR ENLARGEMENT.

This Week. . .
. . .On Monday Professor William Cavanaugh, PhD will arrive to give the community our annual series of four lectures as part of our on-going formation. He will also be available for an optional discussion period. Currently Professor Cavanaugh is a Professor of Theology at DePaul University where he has been teaching since 2010.

…Then On Thursday our Fr. Stephen will travel to Gethsemani Abbey for a few days. He will be there for a meeting of the new editorial team of Cistercian Studies Quarterly of which he is taking over responsibilities as assistant editor.

Dearest Brethren, if we have not received the spirit of this world but the Spirit that is of God we ought to know the things that are given us from God (1 Cor. 2:11). Do you ask what things are these? I answer: all things.

And if you will not believe my word, believe the Apostle’s. He that spared not his own Son, so we read in the Epistle to the Romans, but delivered Him up for us all, how has He not also with Him given us all things? (Rom. 8:32). This is indeed the power proper to the sons of God which He has given to as many as have received Him (John 1:12); this is the glory of every faithful Christian, the glory, as it were, of the adopted children of the Father, adopted through Him Whose glory we have seen, the glory as it were of the Only Begotten of the Father, full of grace and truth (ibid.14).

And hear from the Lord Himself how great that power is: All things, He says, are possible to him that believes. (Mark 9:22)