Due to changes in our distribution Monks’ Bread will be available for retail sales exclusively at Wegmans stores in Western and Central New York beginning Monday, August 19th. It will also continue to be available in our newly expanded bread store at the Abbey along with a variety of artisan breads also from our bakery. We will also continue shipping all varieties of Monks’ Bread to customers purchasing on line at www.monksbread.com

Abbot Gerard D’Souza explains that by moderating our production and more precisely focusing our distribution, we are able to provide a more direct route from our bakery to our customers’ tables.

To quote our Monks’ Bread page: When the monks arrived from The Abbey of Gethsemani in the spring of 1951, Br. Sylvester began baking a wholesome, old fashioned loaf of bread for the community and a few guests. Before long guests and visitors were asking to purchase this unique loaf.

To respond to the demand 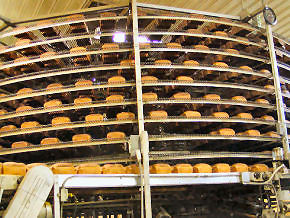 for bread, now known as Monks’ Bread, it was decided to incorporate a small bakery in the new Abbey the monks were building. By the spring of 1956 things had progressed to where a large modern bakery was set in operation. Today that bakery, continually upgraded and improved, is still in operation producing nine varieties of Monks’ Bread: white, whole wheat, raisin, maple cinnamon, sunflower bran, multi-grain, and, during Christmas and Easter holiday seasons, holiday bread. Monks’ Bread is a specialty loaf in which only the finest ingredients are used and baked according to the old-fashioned fermentation process. This process requires some five hours from beginning to the end of the process and some 14 people laboring at various machines along the way. 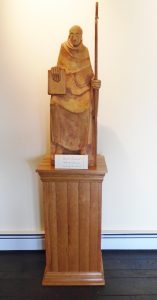 Pictured here is a statue of St. Bernard that will greet visitors to the Abbey’s reception room on a pedestal made by one of the brothers.

Coming Down
Slowly but surely the long abandoned dairy barn is coming down. Pictured here is Br. Paul with the help 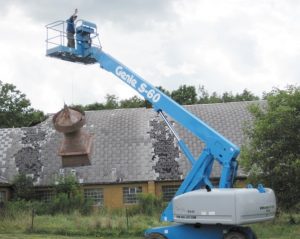 of a boom lift from our friends at Holland High Lift rescuing the last of the 3 remaining cow barn cupolas from being buried under rubble as the barn continues to crumble. They have been there since the mid 50’s when the barn was built doing an excellent job of venting the 2nd floor hay loft.

Since the cupolas are in good shape Br. Paul mentioned that we are taking offers for those who might be interested in purchasing  1 , 2 or all 3.  He can be contacted at brotherpaul1959@gmail.com  Hopefully the rest of the demolition will move along.

The exaltation of Jesus in death, his being”lifted up,” both physically and spiritually is an answer to the enigma of Job’s afflictions. The good person is not immune from misfortune, whether it be boils, bereavement, or bankruptcy. What the passion of Jesus should reveal to us, and to the contemplative in particular, is that God’s favor is not related to good or bad fortune. Nothing in life can separate the authentic mystic from the love of God, neither death, nor life, nor angels, nor principalities, nor things present, nor things to come, nor powers, nor height, nor depth, nor anything else in all creation (Rom. 8:38).

Love transcends by far the world of opposites, of pleasure and pain, of good and evil, and the whole world of hedonistic morality. The agony does not exclude the ecstasy. They can coexist in one and the same person. The Man of Sorrows, the Suffering Servant of Isaiah’s Fourth Servant Song, is also the King of Glory. The death of Christ is warranty that this is indeed the case. It is not so much a paradox as the coincidence of opposites.

The Mystical Sense of the Gospels
James M. Somerville