Tuesday, August 15th
Solemnity of the Assumption of Our Lady
Mass will be at 10:00 AM

Solemnity of the Assumption 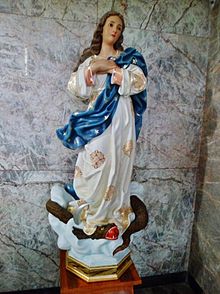 The Assumption of Mary has been an especially favorite feast of the whole Cistercian Order from the very beginning. As mentioned in the Ordo she is the special patroness of the Order under the title of the Assumption. As such all the main altars in our abbey churches are consecrated to God in honor of her Assumption. According to the Constitutions each community of the Order and all the monks are dedicated to the Blessed Virgin Mary, Mother and Symbol of the Church in the order of faith, love and perfect union with Christ (Const. 4). Thomas Merton mentioned in an article some time ago that the Order was the very first to be dedicated entirely to her.

This year there is an additional cause for a joyous celebration for us: the Silver Anniversary of our Fr. John Denburger’s solemn profession.  Heartfelt congratulations to you, Father John and to the others celebrating anniversaries of their solemn profession: Fr. John Eudes 62nd, Br. Alberic 59th, Br. Cyril 56th, Fr. Justin 39th, Br. David Wilson 19th. Thank you all for persevering!!

Word From Awhum
This past week we received some good news from our Awhum, our daughter house in Nigeria: The ordination on August 5th of three of their brothers to the priesthood! 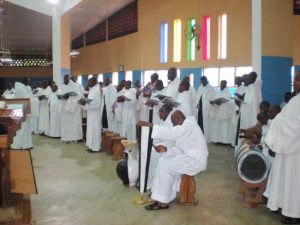 Father Matthew was born in 1967 in Benue.
He entered Awhum in 2000
and made his solemn profession in 2007.
He is currently the Prior Administrator of the Community.

Who shall declare the Assumption of Mary? For the glory wherewith she is crowned in heaven is as singular as the grace she found upon earth was incomparable.

If eye has not seen nor ear heard, nor has it entered into the heart of man what things God has prepared for them that love Him (1 Cor.2:9) who can say or conceive what He has prepared for her that bore Him and that loves Him – which no one doubts – with a love unparalleled?

Oh, happy in truth is Mary and doubly happy in that she has both received the Savior and has been received by the Savior. In both these signal honors the dignity of the Virgin Mother appears to us equally admirable, in both the condescension of the Divine Majesty appears equally worthy of praise.

First Sermon For The Feast Of The Assumption
St. Bernard of Clairvaux