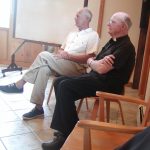 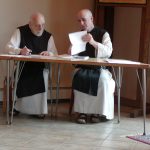 Abbot Gerard’s six year term as Abbot having expired, the community gathered to elect a successor this past Thursday, May 31st, Feast of the Visitation of Our Lady. Our Father Immediate, Abbot Elias Dietz, Abbot of Gethemani, presided following all the protocol of Canon Law and the Constitutions of the Order. 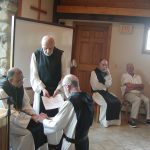 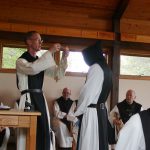 To no one’s surprise Fr. Gerard was elected for another six year term on the first ballot by a large majority.

He was duly installed and each member renewed his vow of obedience to him. (click photos for enlargement) 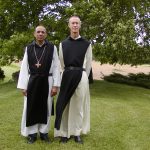 Regional Web Page
The USA Trappists have published a new web page this past week. It contains information about each Trappist and Trappistine community in the United States. The major headings include Trappist Life, History and Wisdom, Becoming a Trappist, Our Monasteries, News & Events & a Contact Us page. You will find it at Trappist Brothers & Sisters 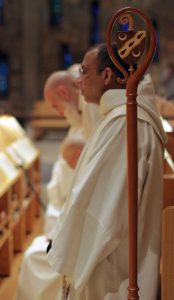 To be worthy of the task of governing a monastery, the abbot must always remember what his title signifies and act as a superior should. He is believed to hold the place of Christ in the monastery, since he is addressed by the title of Christ . . . (Rule of St. Benedict 2:1-2).

Furthermore, anyone who receives the name of abbot is to lead his disciples by a twofold teaching: he must point out to them all that is good and holy more by example than by words, proposing the commandments of the Lord to receptive disciples with words, but demonstrating God’s instructions to the stubborn and the dull by a living example .  .  . (Rule of St. Benedict 2:11-12).